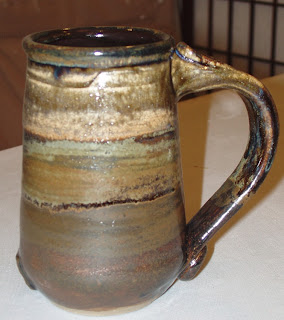 No matter how long I have been working with clay, or how much I think I know, I learn every once in a while just how little I actually do know. After twenty years with my fingers in the mud it is good for me, I suppose, to be brought back into the reality that pottery is an often unpredictable process. It is a good lesson in letting go of expectations.

I just fired my first glaze load of the season two nights ago. I was in a hurry to get the load through since soon I won't have electric to the barn as of Tuesday (that's a whole other blog post!). And it never fails, when I am in a rush and drive myself insane trying to meet a deadline, something inevitably goes wrong. I know, you would think I would have learned my lesson by now. But I haven't. I fell back into my old pattern of 16-hour days , near non-stop work to get pottery glazed and fired. It doesn't help that I am trying to finish up the last two weeks of school, am organizing a huge community art project, and applying for grad studies, all at once.

Walking around like a zombie during the day, somewhat sleep deprived, my mind buzzing wildly, I got those darn pots glazed! Loaded the kiln late Thursday night, and Friday morning as I set of to school, started the kiln. It has a computer module that seems to work fairly accurately. Chris works at home most days, so he monitors the progress and makes sure all is safe.

I was feeling pretty relaxed by 7:30 p.m.: ware glazed for the second firing, first load near completion. In fact, the cone 5 load was just about done, only 50 degrees from completion. I walked into the house and started to make dinner. Heard Chris walking about upstairs. He called down to me, in a somewhat nervously questioning voice "is the kiln still on?" I replied, "Yep. Will be done in about a half hour."

He immediately came downstairs and walked out to the barn. Uh oh. He had forgotten and turned on the heater upstairs (big electrical surge when the heater cycles and the kiln at the same time). He came in and told me that the module was flashing "Err". (that means error!) Crap!

I turned the kiln back on, programming it for a cone higher than previous. The plan WAS to shut the kiln off manually at 2170 degrees...however, constant watching every twenty minutes didn't work as well as planned. Three hours later, I had fallen asleep. When Chris went out to check on temp, it had climbed quickly to well over 100 degrees more than I wanted.

It took about 15 hours for the kiln to cool down enough for us to open it. A bit depressing to see that some long-awaited pieces were a disaster. But all wasn't lost. The mead mugs came out as I had hoped, earthy and masculine in appearance. The spiral bowls that I have made for years, and seemed to have the system down perfectly, well, those bubbled and pitted and bulged in areas. Icky for sure.

I have the second glaze load cooling now. I will be able to unload later this evening, and am hoping that the kiln Gods feel I have learned enough of a lesson. That it isn't worth it for me to work myself into the ground for a deadline. Balance of time is much more healthy and productive in the long run.