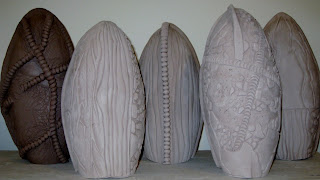 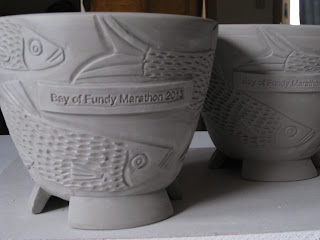 Awards for the Bay of Fundy Marathon (June 2013) are carved and drying - awaiting the first of two kiln firings. Next up: Creation of approximately 80 medallions.
Shanna Wheelock, 2013 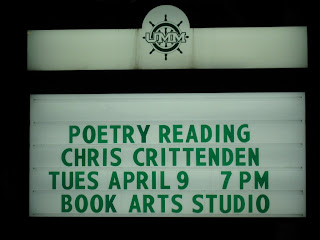 Chris was a busy poet in April, as it was National Poetry month. He packed the house at UMM on the 9th, then scooted up to Bangor the next day to read at "Poet Speak" at the Bangor Public Library. He was one of three poets who represented a new journal "The Catch". 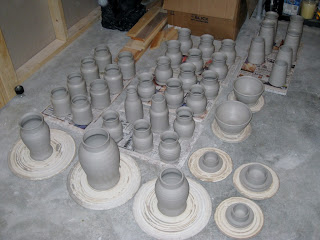 Production pottery is back in full swing. Mugs, mugs, and more mugs. (and a few bowls, sake jugs, vases.....etc.) 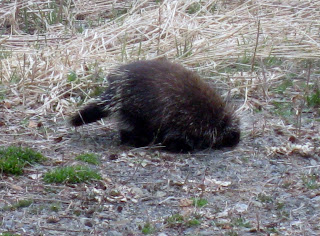 This big spiky guy has been in the front yard the past two evenings. A few days ago, the deer. Wondering what critter will take to feasting on the fresh new greens next. Big hole dug on lawn as well. I think the culprit is the skunk that was scuttling about in our driveway. Last night a raccoon woke me while trying to steal our bagged garbage. Yep. Spring has arrived.
Yesterday I met with friends for an afternoon social. We sat in a cabin poised next to a large window overlooking the serene bay at low tide, sipping locally-crafted crimson berry tea and snacking on homemade nut-meal cookies. The conversation was, as usual, energetic and hopeful; a sharing of ideas and current creative endeavors.
Getting to the point of gathering the three of us in one spot for any length of time is quite the task. To coordinate this afternoon visit, we had met for five minutes in a parking lot two weeks previous with our datebooks in hand. While the organization for a visit is challenging, there is, on some sort of intuitive level, a knowing that these mini gatherings are important and that we should make every effort possible to make them happen.
Our conversation, at one point, turned to the recent Boston marathon bombing. The event has inundated the media this past week and less than 24 hours earlier, a nineteen year old was taken into custody after an intense overnight shootout and manhunt. Boston and surrounding towns had essentially been "shut-down", the streets void of people and transit lest for the hundreds of cops and other tactical teams. My mother recalled that she had not seen anything like this since she lived in Boston in the sixties when the "Boston Strangler" was at-large and there was an after-dark curfew for women. In a city that is normally active with pedestrians and the whir of vehicles, the silence was eerie.
In our round table discussion, we offered our feelings on the subject. The conversation was inevitably politically-tinged and we all did not have the same thoughts on how the country as a whole should proceed or prevent further violent acts of this nature. While our politics differed, one thing stood out: Despite deeply held individual beliefs, we gather in peace, compassion, and respect on a common ground of friendship, healing, and art.
This has had me thinking how very rare it is that people of opposing views can be in each others' presence in these turbulent, highly-divided political times and still find "the common ground" that links us. We hear politicians talk about "meeting in the middle" but seldom does that actually occur. Seldom can we even gather polar opposites without a real knock-down drag-out verbal boxing round. We are a country at odds, and in the bigger picture, that won't fare well for us or the young people that are growing up in these times.
We live surrounded by (an acceptance of) the culture of violence. While the recent bombing in Boston shook us at the core and stripped us of yet another layer of what little bit of security that we felt, we continue on with our lives and for me personally, I wonder, what really can, or will, be done to change this course of self-destruction.
Even after the Newtown shooting that claimed the lives of twenty-five young children and two adults, a slight majority of our political "leaders" would not budge to allow a simple background check before a person buys a gun. This was after a knowing that 90% of Americans favored such legislation. What will it take?  How many more heartbreaking acts of violence will finally put us over that threshold where EVERYONE says that "enough is enough".
When will we start looking to real solutions that begin to rebuild us a healthy, compassionate, peaceful society?