Rounding Out Summer with Pottery Production 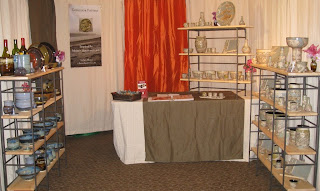 My booth set-up in Bar Harbor at the Maine Crafts Guild show.
It's still a work in progress and will no doubt change before next summer's exhibits.
Everything I take to a show has to fit in a tiny Honda Fit!!!
So yes, there are some limitations. 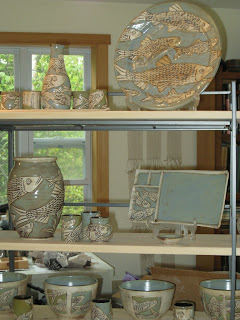 Some of my recent Herring Collectors Series work.
The bowls on the bottom shelf are some of my new favorites. 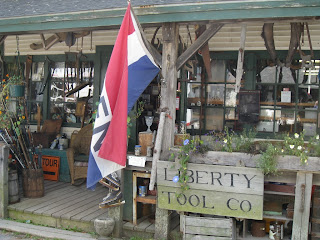 On our way home a few days ago Chris and I stopped by Liberty Tool Company.
What a fun place! 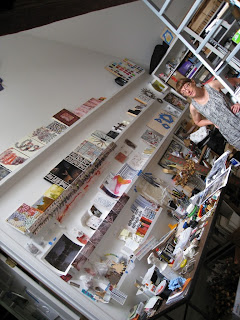 It was such a treat to have an artist-led tour of Sarah Brayman's studio in Brunswick.
The walls and floor were stacked and packed with color!!! 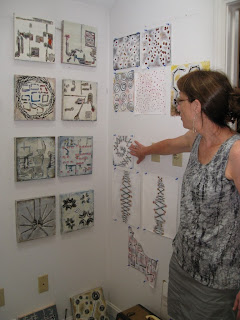 Sarah explains some of her recent encaustic and acrylic paintings.
Love the concept! 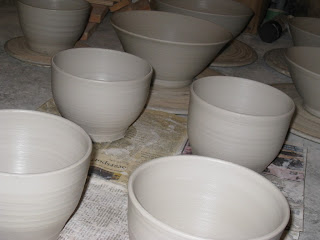 Finally back at the wheel!
The past three weeks were all abut glazing, firing, vending, and travel. Feels good to get all muddy again! I'm just now beginning an intensive throwing schedule in preparation for the next round of shows this fall.

Chris and I went to the Attila Vural concert at Crow Town Gallery last weekend. What an amazing show! Attila, from Switzerland, is a percussive finger-strumming guitarist. (That's how I think his style is described anyway.) Fred Pierce of Cobscook Bay Music has done a fantastic job of organizing shows this summer. Thanks, Fred! And thank you to Bonnie Beard and Ukey Santos for providing such a beautiful space for the shows!
With both Bar Harbor vending engagements behind me I am now enjoying a teeny respite from the travel. Preparing for an out-of-town show is a multi-day project between packing, preparing display, travel to and fro, and the actual sale. The two Bar Harbor shows were less than three weeks apart and that left me with literally no spare time. Sixteen hour days were not uncommon, twelve hour days a given. To celebrate the end of the hub-bub, Chris and I enjoyed an evening out for live music, our first real social event of the summer. If you get a chance, check out the video of Attila Vural (posted above). Phenomenal! My one night back in Lubec was quick, as we hit the road the next morning for a family gathering in central Maine. That short trip was fast-paced as well, but I fit in lots: pottery deliveries, Chris' birthday prep, and time with family.
While in central Maine I visited the studio of artist Sarah Brayham. She lives in an artsy little college town in a stately but quite eclectic house with overgrown garden, her eccentric painter partner, and their three Siamese cats. I met Sarah in an encaustics workshop about two years ago. Her work sounded intriguing. And by intriguing, I mean... how many people do you know who use dental x-rays part of their primary creative work?! Sarah's main medium is photography but she also paints with wax and acrylics and in general dabbles with whatever catches her fancy. What I love most about her work is the conceptual component which has some overlaps with my current factory ruins work. I always admire an artist studio that is overflowing with stuff, messily organized (yes, there is such a thing) and full of color. Sarah's studio looked like a burst of genius inspiration (or colorful tornado?) with ideas scattered on the floor, tacked to walls, and stacked on shelves. There was a feast for the eyes in very corner. I think I partly admire this kind of artist environment so much because my own strange work quirks force me to organize my space to create a "clean" palette before starting a new project. I secretly wish I could be so free. Once a project has begun and I am deep into it, the studio becomes a disaster zone, but before I can begin to make the mess, there needs to be no mess. Well, unless we are talking about the cave. That is ALWAYS messy.

So, here I am now, home in Lubec feeling good. There is breathing space. This respite is brief but I'll take it. For the next four days the only thing I need to focus on is pottery production. My mind will focus on the spinning wheel and a few walks with friends. Friday is Lubec Arts Alive stuff and Saturday I pack for farmers market, then soon after I hop back into my Masters' program work. But....no major road travel or vending for a while. The next two venues, other than the weekend market, will be more local four weeks from now. That means no overnight motel events.

As I was sitting in the motel in Bar Harbor one evening I thought about the perception that folks might have who envision me off in a hugely popular touristy coastal Maine town for three days. You would think that I would be enjoying the sights and shops and living it up, in a manner of speaking, in a nice hotel space with all kinds of amenities and ritzy meals. The reality of being a crafter on the road is quite the opposite. At least in my experience and what I see of the others I vend alongside. Some tent, some sleep in cars, and at the end of the day, tired bodies just want to flop and sleep. Here is how my three days went....

After a few days of hustling around the house getting pottery glazed, fired, and packed, I hit the road at 7:30 a.m. on a Wednesday morning after only three hours of sleep. Along the way, I went to the bank for change and the market for food. My cheap motel accommodations did have a microwave and small fridge which makes eating on the road much cheaper. At 11:00 a.m. I checked into the motel to snag my key. I dropped off my clothing bag to lighten the car load and scooted over to the venue to begin setting up at noon. Vendors are focused and scurrying to get vehicles unpacked and booths set up. At 3:45 I finished my set-up and all sweaty and messy I drove the twelve miles back to the motel to grab a super quick shower. After 45 minutes in the motel room (glorious!) I hopped back in car and drove to the venue which opened at 5:00. Patrons filtered in through the night and at 9:00 p.m. we closed shop. I drove back to my room where I flopped on the bed to eat my lean cuisine frozen meal for supper while checking email and calling Chris.

The next morning I ate a microwave breakfast sandwich before heading off to the venue. I greeted visitors and talked about my work for the next seven hours. Lunch was crackers and cheese, easy to sneak a few bites in between booth visitors. After the venue closed, I made a trip to a filling station to add air to the leaking front tire. (Time to renew AAA perhaps?). I grabbed some cheap Chinese take-out and ate it in the motel room while spending three and a half hours working on a volunteer project on my laptop.

I'm sure someone somewhere was having fun.

Just as I finished up and was ready to crash for the night, the people in the room next to me decided to have a super loud screaming match. I sat with the phone nearby ready to call 911 should it progress physically. More people ran downstairs to the room and joined in on the hollering. This went on for about 45 minutes, ending a bit after midnight, followed by loud laughter and music. I guess they all made-up.

In the morning I checked out of my room and drove back into Bar Harbor for the final day of vending. The last day was much busier. I met a lot of interesting people and had some great conversations about pottery. Lunch was delivered to my booth thanks to $9 in meal tickets compliments of the guild. I found a chair and sat down for the first time during the three day show. The show ended at 4:00 p.m. and as the doors closed vendors immediately went into scurry mode as they broke down their booths and packed their wares. It took me about two and a half hours to pack up and that was the speedy version thanks to a couple teens who offered to lug boxes for tips. With a full-packed car once again, I made the trek back up route one toward home. Along the way I pumped-up the leaky tire, filled myself with caffeine and a pizza slice for the long drive,  and rolled along route 1 toward Lubec. I made it into port at 9:30 p.m., greeted by Chris, Bello, and Bouli.

This year I have planned a lot of vending venues but only four of them involve enough distance that I am away from home for a few nights. I am testing the waters this year and still juggling my MFA program with work. Next year as the MFA starts to wind down I will add in a few more venues. I am accruing lots of advice from vendors who have been on the circuit for years and making changes accordingly. There is a lot of learning to be done and I am a "newbie" as they say.

So, I am back into production mode to prepare for the next round of shows that spark the holiday season. Here and there I have sat in my thinking nook and thought how much I am looking forward to the transition back into the sculpting, drawing, and painting with wax. It is a shifting of gears but more so a juggling act in the fall. The shop is still open into December and November will prove to be one of my busiest ever with venues in both Augusta and Brewer plus my annual holiday sale here and local holiday craft events.

The pottery and art cycles with the seasons. Last winter, except for the marathon awards project, I worked full time (and then some!) on my artwork rather than pottery. It's a whole different experience and process, though both are equally satisfying to my artist soul.

It is, simply put, amazing to be able to work with my hands at something I feel called to do. It is not "easy", and I put in more work hours than ever before in my forty-four years, but I feel so incredibly blessed to be living this life and doing something that so fully nurtures my being.

And on that note, it is time to get a warm bucket of water and head for the cave.
﻿
Posted by SHANNA WHEELOCK at Sunday, August 25, 2013

Liberty Tool is one of my favorite spots! Treasures abound! Great wrap up of summer Shanna!