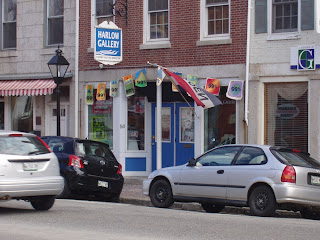 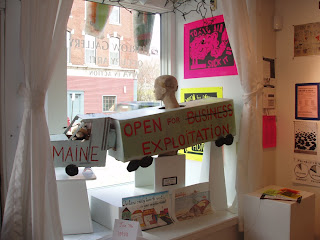 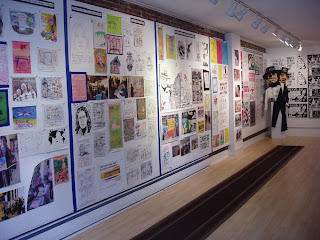 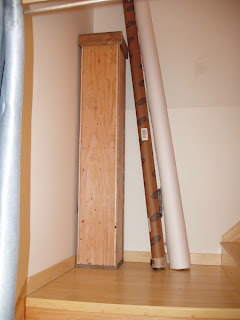 Support structure (top component) built for my upcoming Lubec Landmarks exhibit.
Thanks to my Dad, whose woodworking skills are quite honed!
During our "Father-Daughter Woodshop Day", I learned a lot about the importance of strong support. I loved having another person to problem-solve with during the actual hands-on part of the project - which allowed for some nifty impromptu decisions.
(I must note that he didn't reach a comfort level where he would allow me to operate the dangerous power tools even though I was itching to, but being an observant assistant/apprentice I absorbed much insight for future projects.) 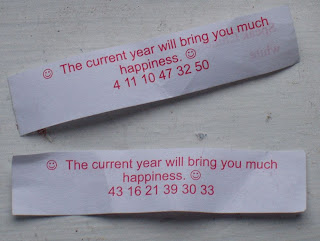 Takeout Friday night from Lucky Garden in Hallowell.
Chris and I both got the same fortune in our cookies.
Looks like a good sign to me!

"Life is like licking honey off a thorn"
-something Berri's Nana used to say...

This past week has been punctuated by extreme highs and lows. The extreme low presented the most painful and emotionally challenging week ever in my thirteen years of teaching. At the other end of the extreme, bursts of hope, beauty, and unexpected treasures surfaced. I know that life is like this, the bitter and the sweet, but to have the two juxtaposed from one hour to the next seems an anomaly. In one moment grief seemed overwhelming, the next, an understanding that life moves forward. To deny celebration and beauty even in the midst of loss would be to deny nature its gifts and lessons. We can be stuck in the pain, or we can let it move through us. I am truly thankful that the universe has been diligent in reminding me of this.

My current sculpture project about the factories that once were is more and more seeming a metaphor for a general sense of loss. It feels to me that Lubec, as a community, experiences a consistent stream of loss at a tragic level far more than any other place that I have lived. Again though, these losses are punctuated by extremes. In the two hundred year history of this town, over thirty factories provided stability and identity for the townspeople. By fire or planned destruction, the factories are now nothing more than a memory or a few dilapidated remnants.

Keeping with this tradition of letting go, people are the same. They filter in and out, from migrant workers to families that move from far reaches of the country only to soon relocate once again. Two years ago, the high school was shut-down, a huge loss for the kids and general community. It seems, as well, that more lives are lost to tragic circumstances than humanly conceivable.

Lubec's tiny population in a remote poverty-stricken area of the nation, in my opinion, experiences loss far too often. It might be some sort of cosmic alignment at play, or it could simply be that loss is a natural expectation of a community that depends on the powerful forces of nature for its livelihood. There are no cushy Wall Street vocations and nature's elements, though powerful and beautiful, can be cruel. There has been a high number of teens who have died in the past year, which is especially painful for a community to come to grips with.

Looking at Lubec's history, such unjustifiable and unexpected death is not new. In 1936, twelve students drown in Gardner Lake. I cannot even imagine how a community begins to heal after such a tragedy. Still, it is the constitution of the people here to somehow pick up the pieces and move forward. They are strong, resilient, and know hardships of everyday living. It would be too easy to crumble in the face of such adversity, and easy is not what makes a person stronger.

The high points this past week included joining my husband and other great Maine artists and poets at the opening reception for Occupy Art! at the Harlow Gallery in Hallowell. The exhibit was a culmination of the dedication and hard work of artist organizers Natasha Mayers, Robert Shetterly, Kenny Cole, Nora Tyron, Code Pink activist Lisa Savage, and several Maine artists who participated in the UMVA Draw-A-Thons over the past two years.

The Draw-A-Thons began as a grassroots "Bring our War Dollars Home" initiative and continued to gain momentum after the governor's removal of the Maine Labor Mural and now as the Occupy Movement continues. As we can see with the current Harlow Gallery exhibit, artists are an empowering and articulate voice for justice, equality, and hope.

My husband Chris was one of the four poets who read at the opening reception last Friday. It was an uplifting evening that was much appreciated after the two previous grief-filled days.

Another highlight this past week was our dinner guest Jon Wing Lum, the filmmaker who created the Lubec Arts Alive documentary. As one of the first Asian American filmmakers, he opened the door for other Asians in the industry. He was a proponent of "catalytic cinema", working on projects to promote social change. The conversations this evening were incredibly interesting, swinging from stories about working with artists in New York such as DeKooning and Jasper Johns to experiences in the south during the civil rights movement. What I love most about Wing is his gentle spirit and humble character despite such amazing accomplishments. He is one of Lubec's gems for sure.

There were other little unexpected twists and turns including our hotel room. For the poetry reading event, we arrived late to town Thursday night weary from grief and travel to be told at the front desk that we were given a "slight upgrade". Having sought out the cheapest of the clean accommodations in the area with wifi access so that Chris could continue his online teaching work while we were away, we didn't fully grasp "slight upgrade" until we opened the second floor room door.

Did you know that some hotel rooms come with telephones by the toilet?

For a couple nights we jokingly lived the 1% lifestyle (albeit with takeout food and a strict budget) while rallying for the 99%. All by accident. Back to Lubec now - where the phone rests on its charger in a room off the kitchen, out-of-reach from the toilet.
Posted by SHANNA WHEELOCK at Sunday, April 08, 2012

Sorry to hear of your tough week, and at the same time note the resilience that has to come from so many sources, only two of which are living where you live and being self employed. The beauty (and utility) of your work is with me every day as I drink a nice mug of tea, or enjoy my morning ritual of oatmeal, raisins, and sunflower seeds.

"To deny celebration and beauty even in the midst of loss would be to deny nature its gifts and lessons."

This quote, and so much more, taught me great lessons on how to live. I held back from teary eyes... until the video overwhelming me.

What a time it has been, what a beautiful wise blog.