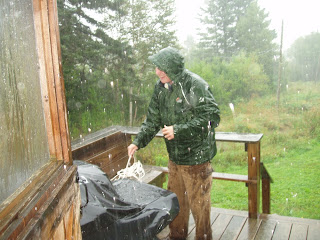 When Chris went outside to secure the grill in case of heavy winds, the rain had quelled to a smattering of drops. Once he began the task, however, a torrential downpour stirred. Yes...I thought it was funny....and....I told him he could NOT come inside until I got a good picture for the blog! 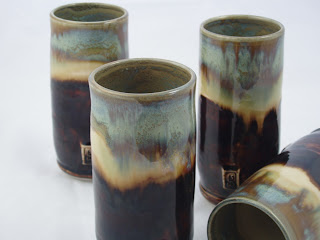 Set of four tall tumblers.
An official Cobscook Pottery website is in the works, but in the meantime, I will continue to post a few items on Etsy. 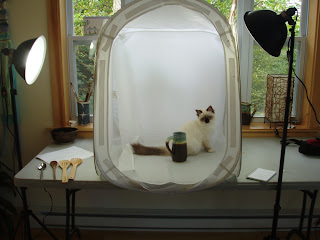 Bouli thought that she should help with the photo shoot for the Etsy site.
The mug is sold "sans Bouli".

I guess it takes a storm to bring on a day of relaxation! Quiche, peanut butter cookies, blueberry muffins, and zucchini-carrot bread have been baked. The house is clean and smells like warm toasty cinnamon. It all feels pretty mellow and homey. Yesterday was quite a few hours of prep including cleaning out the barn so that the car could be put away safe. I think that Chris has gone into "survival mode". Yesterday he cooked and dehydrated a huge batch of "Sierra Pasta" which he proudly packaged and stored away in the freezer this morning.

The impending storm has been the impetus to get a few things done around here. I even got into the garden to pluck the ripened goodies which are now washed and drying on the kitchen counter. If the storm hits, we have good food. If it doesn't, we still have good food! The cats are hunkering down with us, null in the begging department for outdoor activity. So far, we have had torrential downpours and thunder much of the late morning into early afternoon, but the "tropical storm" is not expected to hit until later this evening. Talk about a dramatic re-entry into the school year!

This past week felt most like vacation than any other week this past summer. Like most teachers, I have a summer job that keeps me preoccupied. The shop has been busy with customers visiting from all reaches of the country, Canada, and even Europe. Between tending shop and pottery production, I was hoppin', but this past week was a bit of an exhale as we had the blueberry festival vending behind us and we had slotted in some enjoyable activities. After a day of Chris and I basically sitting around in a comatose state from exhaustion, we recuperated enough to visit Geer and Pat for homemade waffles (I admit it, we beg them for these waffles every year!). It's always good to catch-up and participate in lively conversation. After our stomach-bulging brunch, Chris and I headed into Machias for a kayak excursion. There is a stream that we hadn't tried in a couple years so we gave that a whirl. It proved to be quite enjoyable and perhaps is now on my list of top fave kayak locations. We ventured off on an inlet and came upon a clay bed which was fascinating. There were plenty of tiny fish, and a few larger ones jumping, as well as a frog or two near the waterlilies. The dragonflies were flitting about and the geese, though slightly annoyed by us, didn't budge much at all as we floated by. We even saw a beaver slink down into the water and found plenty of smaller trees that had succumbed to its teeth-carving carpentry.

I spent the middle of the week cleaning the pottery cave (as much as it can be cleaned!) and then set-up the photo tent to get images of recent pottery work. My hope is that an official Cobscook Pottery website will be up and running this fall, but decided that in the meantime I would upload a few items to my Etsy site which has been void of pottery for some months now. I might try to snap a few more shots of work this week to upload, though I suspect I will have my hands full with setting up my classroom and welcoming students back.

My job teaching job changes dramatically this year. I will return to school as a half-time art teacher. This is a huge change for me as I have been teaching full-time for the past fourteen years. I am embracing the extra time to dive into my sculptural work and to grow the pottery business. I spent a lot of time this summer working out the details and game plan of how to proceed forward in my life as an artist. There is no time like the present to go after your dreams!

I hope that all my readers on the east coast have fared well and safe throughout the storm. And for those still awaiting Irene's arrival....take care!
Posted by SHANNA WHEELOCK at Sunday, August 28, 2011