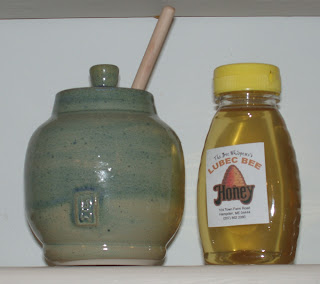 Honey Pots: $30 with dipper or
$34.50 with dipper and 8 oz. of fresh Lubec Bee Honey
Honey pots have been fired and are sold with the first batch of honey from the Lubec bees that swarmed our house back in June. This honey tastes amazing! Peter Cowin of Hampden is the Bee Whisperer who saved the bees and now oversees their honey production. 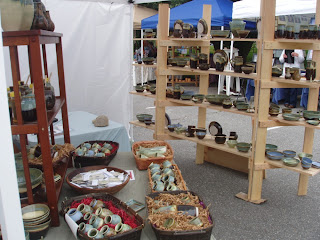 Chris and I vended the Machias Wild Blueberry Festival this past weekend. 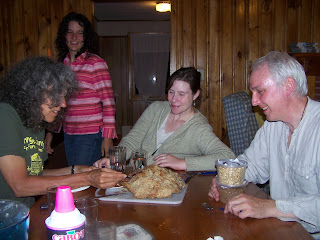 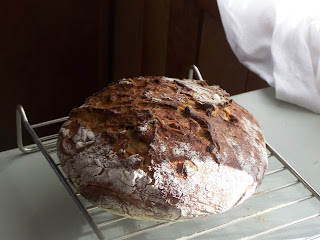 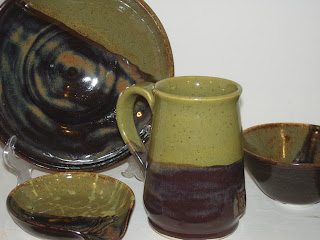 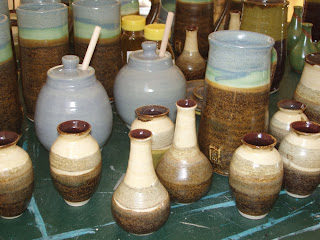 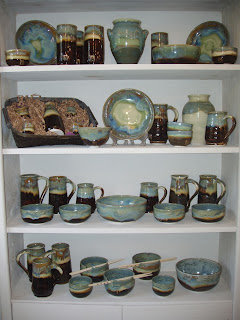 Pottery on shelves in our Cobscook Pottery and Fiber Arts shop. 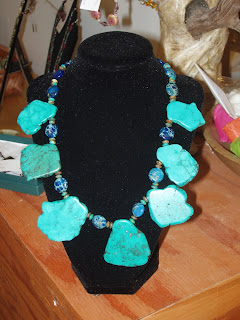 Stunning new turquoise necklace for sale in our shop,
handmade by my sister Kristin Wheelock, The Indigo Iris.

Though it has only been a few days, it feels like weeks have passed since my last blog entry when dealing with the intricacies of computerized kiln firing methods. With new elements and relays replaced (thanks to my dad and Chris!) the kiln is firing hotter than ever, which now presents its own set of issues. It is like working with new glazes again, and I have resorted to using cones and peepholes to gauge temperature. I thought those days were behind me! The next few firings will be test firings and I won't risk my best wares. Until I have a good grasp of what to expect (if such a thing is possible in pottery!) I will be holding off on new work for a few weeks. Well, the glazing component anyway. I am itching to get back at the wheel. The glazing for the past two weeks was tedious work, but working with form calls to me.

This past weekend was my re-entry into festival vending. I kinda laugh at myself for calling my sister while at the festival to say to her that "now I remember why I gave up vending years ago." It is exhausting work! We were told to be unloaded and have car moved from area by 7:00 a.m. This early arrival was met with energetic resistance post sleep-deprivation after a previous day of packing ware and loading tent and display units on car racks. Not to mention, we were already zombie-like from late night firings, travel, and kiln issues. The first day of the two-day Machias Blueberry Festival was hot, humid, and hectic. At the end of the day, wares had to be packed and loaded, only to be returned the next morning at 7:30 a.m. for day two. Though tired, I enjoyed day two much more. Having the display figured out, and somewhat the quirky knucklebuster Visa machine, I was a wee bit more relaxed and got to enjoy conversations with other vendors. Chris and I were glad, however, when 3:00 rolled around and we could pack up and head home.

Day two of the festival was also Chris' birthday. I know I know. It was torture to have to work on his birthday, but the day ended on a celebratory note with a magical-misty hike in the fog at West Quoddy, followed by a garden fresh pasta dinner complete with gifts and homemade cake. Needless to say, we are both drained to the max today and moving a bit more at a turtle's pace.

In the midst of festival preparation and kiln quirks, we enjoyed an amazing evening with friends. Rabbis Jonathan Rubenstein and Linda Motzkin of Saratoga Springs, New York, have been visiting Lubec for many years more than we have lived here. The past few years they have stopped by the shop to say hello, and this year we were the beneficiaries of a delicious meal at their cottage overlooking the bay. Not only was the food delicious, but the entire evening was a meaningful exchange of philosophies and cultures. Linda is one of only a handful of women scribes in the world, translating ancient texts, and Jonathan is a master baker for the Slice of Heaven Bakery. Together they are "Bread and Torah". They are co-Rabbis for Temple Sinai in Saratoga Springs, and their daughter Ruhi is following in their footsteps, planning to become a Rabbi as well. As you can see by the photos above, we were well-fed that evening with homemade bread, pie, and delicious ginger-sesame tofu with veggies. What a treat!

All else is status quo here. The garden is starting to produce ripened sun gold tomatoes in good quantity. It's more like a tomato jungle than a garden plot, though. Next year I will know that the plants must be spread a bit further apart. Presently, I have to tip toe throughout the wandering stalks and shoots delicately so as not to crush too many fruits. Tonight I plan to cook a special meal in honor of Chris' birthday and will pluck fresh green beans to accompany the main dish.

Bouli is getting big! She is almost five months old now and still torments elder Bello. But Bello is making small steps in reclaiming his space in the house. I have high hopes that all will get along fine before long.

Shanna, Thanks for mentioning your friends from Saratoga. We go there often and we be actually going there this weekend so Marty can get in some horse-racing action before it ends for the summer. I have not heard of The Slice of Heaven bakery, but you can be sure that we will be checking it out! Thanks for sharing! Pam C. NH

You're in for a treat! If you get to the bakery - say hi to Jonathan and Linda for me!