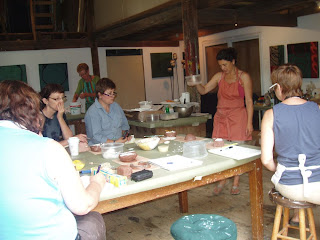 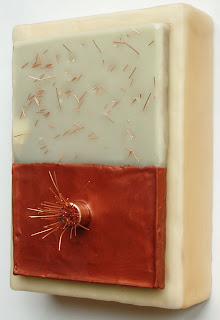 An encaustic painting that I made during Kim's workshop.
Beeswax, copper, and wood 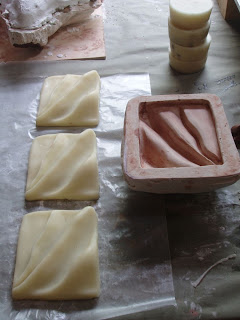 I made a clay form then casted it with plaster. The plaster mold was then used to make beeswax impressions which I will later use for a high relief encaustic painting. 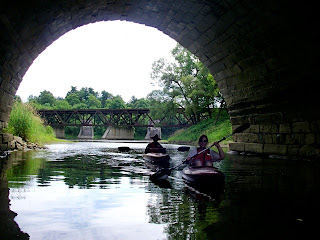 Kayaking on the Kennebec, under the Bond Brook Bridge in Augusta.
Photo by Joe Phelan 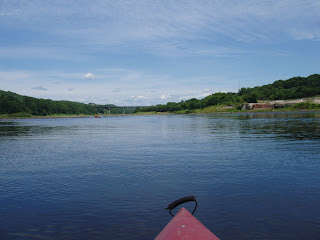 The bridge area that Chris has been wanting to kayak.
It looked kinda close (bridge in far-off distance)....but...those darn currents were fierce!
Did we make it?
Read the blog entry below to find out! 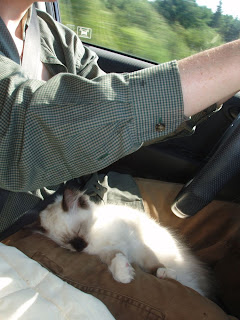 Bouli the traveling cat, nestled in Chris' lap for four hours while driving to central Maine.

As far as birthdays go, I have to say, this was one of the tops. Several days of fun with art, friends, family, and kayaking concluded as we arrived home yesterday to find the August/September 2011 issue of American Craft magazine in the the mailbox. This little event was like the cherry on top of the sundae....bright, sweet, and oh so yummy. After months of emails and proofing, photo shoots, and labeling, I got to see the finished product. I feel incredibly blessed and appreciative that the magazine included an article about my work, titled "Remote Revival." Janet Wallace did a great job with the writing of the piece, and Leslie Bowman with the photography of my sculptures. Thank you Janet, Leslie, and American Craft!

Click here to link to the article in American Craft: "Remote Revival"
It's a great magazine - you may just want to visit their site and subscribe. It's only $25 for the year and the images are inspiring!!!!
Chris provided me with an awesome birthday gift this year which was a spot in one of Kim Bernard's encaustic workshops. Kim is a phenomenal teacher and artist and I am fortunate to work under her mentorship during the Heartwood College of Art MFA program. Kim is a sculptor who has experience with ceramics and the encaustics process. All these skills combined make for an interesting learning opportunity for all her students. The particular workshop that I participated in last weekend was "Exploring Dimensionality in Wax". It was two full days of mold-making and tips and tricks in embedding items into wax. The participants were a focused and serious art-making group who hailed from various parts of the globe with interesting stories and art-making experiences. Kim has more workshops slated for August and September. If you have an interest, her intro to encaustics workshop is being offered August 6-7. Limited spaces go quickly, so best check into it soon.

I spent time with family as well and we feasted on lobster and strawberry shortcake, laughed, did a bit of swimming and relaxed. It was a respite from my normally hectic schedule. Monday was a day of kayaking and hanging out with our friend Joe. Chris had been wanting to paddle a particular spot on the Kennebec that we saw each time we passed over the new bridge on route 3. We launched our kayaks down by Fort Western and began our trek upriver. We could see the goal and it seemed like things were going along smoothly. We ventured around old granite foundations and under the Bond Brook Bridge, saw ducks, and watched eagles soar overhead. About halfway to our destination, fierce currents kicked in. As Joe described, it was like a treadmill version for kayaking; we paddled madly while not moving forward one iota. Adrenaline kicked into high gear and we eventually broke through to smoother waters. Then, just when we were feeling confident, the current battled us again. We went through this scenario about four times, but eventually made it to the destination. The ride back was super easy - with those strong currents flowing us back to the boat ramp.

Bouli traveled with us this time around. She's still too young and needy to leave behind and seems to do pretty well adapting to new environments. She is amazing in the car. After about fifteen minutes, she settled into one of our laps and slept pretty much the entire way. Those moments, when not climbing screens or harassing Bello, are precious.

We returned home last night fearful that the heatwave and no rain wreaked havoc on the garden - but it was just the opposite. We have peas! There are a few tiny green beans starting to grow and we are ready to harvest basil for some fresh pesto this weekend. I ate the first tiny, ripe, sun gold cherry tomato on my actual birthday, July 22. The garden is doing well so far this year. We seem to be behind more southern areas of Maine, but things are coming along and seem hearty enough. Tomorrow we will share a meal with friends that will include freshly harvested lettuce, basil, sage, parsley, thyme, swiss chard, and peas.

Today it is back to the usual routine of pottery business and tending shop. I still have lots to unpack, including new supplies for encaustic painting. The kiln has been loaded and will fire tomorrow and a new run of production will begin.

Speaking of tending shop - when I say that the most interesting people visit my little space, I mean it! Last week, a couple from New Hampshire visited who were related to the person who "invented" the hole in the doughnut. Not the doughnut hole (this is quite different!) but the idea to cut the middle out of the doughnut. Hah! I wonder what eccentricities this week will bring.

Happy Happy Birthday Shanna! So happy to hear you got to spend it with family and friends and you had a great time! The picture of Bouli sleeping on Chris' lap is priceless! What a cutie she is! PS. Donut holes are made of donut dough, however the hole in a donut is a hole other story! Pam C. NH