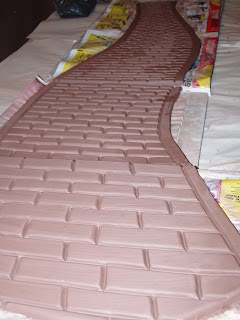 It's been a tough week in the news. I'm experiencing a bit of emotional overload, between the developing nuclear crisis and devastation in Japan to the situation in Libya. It was only a few short weeks ago that we celebrated a major success in Egypt. The world is moving and changing at a rapid rate. I don't remember a time in my life when everything felt so critical on our planet all at once, but Chris points out to me that the 1980's were equally unsettled. I was a young teen then, and though I was becoming aware of the world around me, I was still engrossed in my own life and the joys and tragedies that accompanied young love and trying to make the grade in school. But a seed was planted that has been growing for two and half decades.

I was a kid who questioned everything. I wasn't the type of rebel who could be found in detention every day afterschool. I was more of a philosophical rebel. From a young age I questioned the church, denied the safety of nuclear energy, and was the only teen amongst of a group of seasoned activists in "Beyond War" meetings.

Does anyone remember the video by Genesis, Land of Confusion?

Even though I didn't quite understand all that was happening around me, the video definitely struck a chord. On one level, I found it humorous. On another level I thought "what a sad world we live in". I was a senior in high school when it first aired on MTV. The images and lyrics from that video has stuck with me for all these years. It is a testament to how powerful the arts are (music in this case) and how what we put out there for the public to view, read, or hear has perhaps a much greater impact than most realize.

Little by little, I was receiving an "education" that coupled knowledge with my instinctual self. Four years after the video, while I was in college, a marine friend sent me letters from the front lines of "Operation Desert Storm". I didn't understand fully why the U.S. military was over there. I just knew that anything that put my friend's life in danger didn't seem right. Some of my artwork in college began to illustrate my thoughts around war and peace.

After college, my work took another turn. I began to focus on matters of spirit and myth. The work was more gentle in nature and fed my soul at a deep level. I retreated from reading the newspaper or listening to too much news. I focused solely on empowerment through spiritual enlightenment. Those few years felt blissful in many ways. There was a price in that I adopted an intentional ignorance to avoid that which was painful. These years were crucial, though, in helping me to develop a strong sense of self. Maybe it was kind of like creating a spiritual armor that in later years would protect me from the ugliness and pain that surrounds us, much of it brought on by fellow humans.

My work the past four years has come full circle. I started questioning at an early age, and now my art is once again focused on social/political matters. This time though, I feel that the spiritual component is always underneath the surface, urging me to create with empathy and hope, from a kind and understanding space. I recognize that not all issues, or answers, are as simple as we might first think. I realize that the world has an energy crisis and that less than safe measures may seem the only feasible choice. I realize that even though sweatshop conditions are inhumane, that for some it is a price perceived as worthy because the money feeds a family. I realize that war is horrible and disgusting but at times has been fought to genuinely save a people from concentration camps, or in the case with Lybia, to save people from being murdered by their own government.

The bigger issues we face are seldom black and white. There are always shades of grey, and through my art, I am able to explore the varied sides.

When it comes down to it, when a situation is not easily rectified, or if the answers seem unclear, I have chosen to side with what I consider to be the humane choices. So while the thought process may be long and drawn out, and there are shades of grey, I (as most people) eventually come up with a simplified "this way or that way." But, I always recognize that there are other viewpoints. The key is learning how express a viewpoint that opens a productive dialogue rather than one that is done to deafly incite anger with no intention of trying to understand another's viewpoint.

The path I am taking with my art, at this point in my life, is one that I hope does send a message. I hope to teach people about a viewpoint that they may not have previously considered. It doesn't mean that a viewer has to agree with me. I only ask that people that instead of coming to an immediate conclusion about what is "right" that they stop a moment to consider all sides of a situation. This sort of thought process is essential to developing empathy. And empathy for our fellow human being, the earth, the animals...is what I sincerely feel can turn this world around.

We are powerful. There is a conscious choice that we make collectively between living in a world of fear and hatred or a world of love and safety.

Which do you choose?

These lyrics filter through my head often, stirring my emotions as I struggle to find a balance between awareness of what is going on in our world with genuine hope for a better life for all. I choose to visualize that love and beauty prevail, even when life seems so defeating.

Excellent post, Shanna. Recently, I've been fascinated about finding out about life in North Korea. I find it unbelievable that every aspect of the lives of millions of people can be affected by one person. Worldwide, I am just astounded that such oppression and misery can be put on so many people by so few.

And now, I guess I'll head into my studio and try to create something small and meaningful to me.