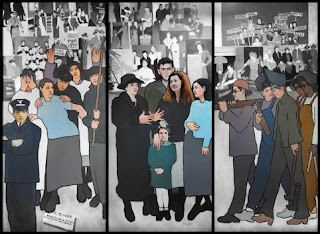 Panels 7 though 9 of Judy Taylor's Maine Department of Labor Mural
Click this link to go directly to Taylor's website that depicts and explains all 11 panels of the mural.

Follow this link to read an article about yesterday's gathering at the Maine Department of Labor. 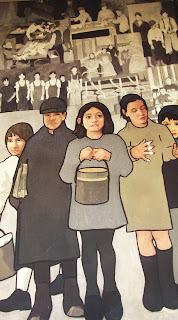 Follow this link for press-conference statements and updates on the mural situation at the official "Saving the History of Maine Mural" blog site.

Bangor Daily News Poll found that 4 out of 5 Mainers do NOT want the mural removed from its intended home!

Maine is in the news, and it is, once again, an embarrassment to the majority of people who reside here. The recently elected governor has decided that a mural which is displayed at the Maine Department of Labor is to be removed becasue it is, he says, "one-sided" and "pro-union".

Yesterday, 250-300 people gathered at the Dept. of Labor for a press-conference and rally in support of keeping the mural at its current location, where it was originally intended when commissioned by the state in 2007. For an explanation of the mural, please visit the artist's website. The painting is steeped in Maine's labor history, and all images were created only after intense and thoughtful research alongside seasoned labor union historian, Charles Scontras.

The press-conference yesterday was especially powerful as it fell on the 100 year anniversary of the Triangle Shirtwaist Factory Fire (March 25, 2011). In a room of hundreds, there was silence, except for the sound of a bell as over 120 names were spoken of the young female workers who died in the fire. In total, 146 people died and it is considered the deadliest industrial disaster in New York. The Triangle fire was a catalyst for modern day saftey regualations that keep our workers safe.

Below are the statements that Chris and I made at the gathering yesterday. I wish I had transcripts of the other speaker's statements as they were incredibly powerful and excellent reminders of of how fortunate we are to live in a democratic society with the benefits that ALL people reap, not just members of unions, because of the battles that labor unions have fought.

Thank you Natasha and Robert for your passion, insight and dedication!!!!

When I first heard that Taylor’s Department of Labor mural would be dismantled, I was, like many, angered. The impending action brought up images of censorship and fear of a dangerous slippery slope where voices are quelled to the point of living in a society where humans are expected to go about their day as emotionless as robots.

What makes this mural so powerful, and so relevant, is that not only does it tell a history of the working people of Maine, but that it has provoked a conversation; one that is quite poignant in today’s society.

The Governor ordered removal of this mural because of complaints about its pro-union theme. Where better to house a mural depicting the struggle of the working class and the rise above adversity than in a complex where the welfare of its state’s workers is the number one priority?

I ask myself, is the subject of this mural offensive?

The answer is: YES!

We should ALL be offended that not everyone finds these things offensive.

Then I ask myself: Is this artwork powerful and inspiring?

And that answer is YES!

I see a story unfolding from the first panel where an apprentice passes down his skills to another, preserving a trade. I see a panel of child laborers and am filled with such relief that our children are able to receive an education rather than toil the days away in a factory. I see women who model strength and perseverance, and I see people uniting for a cause worth fighting.

As we reflect today on the 100 year anniversary of the Triangle Shirtwaist Factory Fire, let us remember that a movement was sparked that made way for safer and more fair work conditions for all. One hundred forty six workers died in that fire. Imagine where we would be today if that part of history was erased from the books, never to teach us, or remind us, the role that the working class has played in our society.

Artists use a visual language to document the stories of our lives. We must always remember the struggles, why we were there, and how we progressed, so that we do not repeat these atrocities again, and that we keep moving forward, toward positive change.

In a travesty of governance, Paul LePage has belittled and dismissed some of the brightest aspects of Maine's history. In deference to a "handful" of unnamed detractors, who object to some few elements of a visually eloquent compendium, the Governor has opted to dismantle the entire magnum opus, a mural in homage to labor on display at the Dept. of Labor. The artistic excellence of this masterpiece is not in dispute.

As a metaphor, we can imagine a handful of privileged men, who walk into a garden, proclaiming that they do not like several of the flowers. In response, over the shock of the gardner and the general populus, every single flower in the garden is plucked up. The garden itself is carved and removed.

The few flowers that are offensive to this small group, in reality represent some of the brightest victories for dignity in human history.

For most of civilization, slavery reigned. After slavery came Dickensian work conditions. We can thank the Labor Movement for uplifting the American people out of horrific industrial sweatshops, what William Blake referred to as "dark Satanic mills."

LePage and a blinkered few to whom he caters, are attempting to obscure the heroes who ended the practice of children having to toil in crowded, unsafe rooms.

LePage and an influential cadre, are attempting to efface those brave and unquenchable souls who brought us the 40-hour work week and the weekend. The word "efface" means to rub out or erase. Etymologically, it literally means to remove the face from. To deprive of a face.

This is crass censorship at its worst. An attack on a history rich with moral pearls. LePage would crush those pearls and replace them with a brine of obeisance to the lowest considerations, the sad and unsupportable principle of "Money Makes Right."

What a moving powerful day it was for those of us protesting next to the mural, hundreds of people filling the corridors, sharing our disbelief and outrage that great victories for human dignity--the end of child labor, the creation of the 40 hour work week, the creation of the weekend, and so on--were being attacked.

The Labor Movement represents one of the great advances in human ethical behavior, and LePage would simply step on that. He wants to make big-money more important than workers and citizens and everything else.