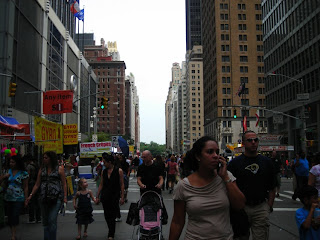 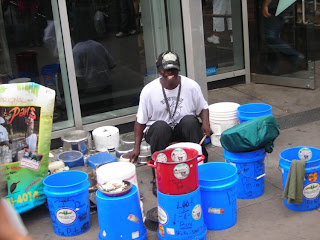 Street Music
Youtube Video link: I think this may be the same performer that we saw in NYC 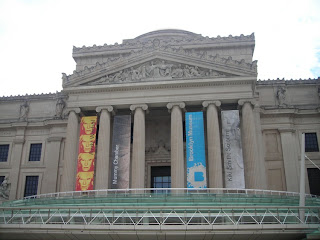 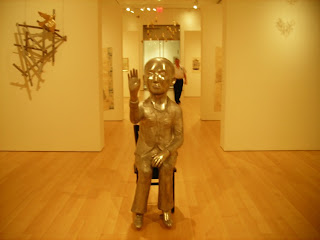 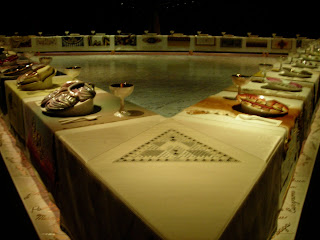 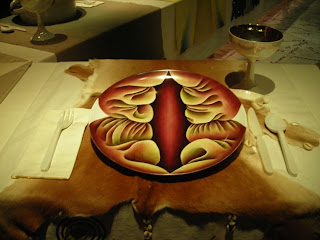 Judy Chicago: The Dinner Party
Close-up detail of the setting for "The Primordial Goddess"
(Brooklyn Museum of Art)

I finally made it back to the Big Apple. Last time I visited was when I was a student at USM nearly twenty years ago. Back then, I had all of ten minutes at MoMA, a quick gallery tour of SOHO, and a visit to the Hudson River Valley Museum. This time around, my mother planned a bus ride to the city, some fairly fancy hotel accommodations in Manhattan, and museum tickets. The day before we boarded the bus to New York, I learned that not only would I be seeing Kiki Smith's Soujourn exhibit, but that Judy Chicago's Dinner Party was also on display at the Brooklyn Museum of Art. Chills!!!

We boarded a greyhound at 7:30 a.m. on a Friday and spent the next eleven hours in traffic and bus stations. The hotel was a welcome reprieve. Coming from Lubec, where the nearest traffic light is fifty miles away, it was a bit of shock for me. The flashing lights and throngs of people, beeping horns, yellow sea of taxi cabs, and sirens were overwhelming. The sounds and lights continued through the night, even when trying to catch a few winks. Saturday morning we pulled ourselves out of bed and prepared for the adventure ahead. Goal: MoMA (Modern Museum of Art).

One of the essential lessons that I learned is that the faster people move, the longer it takes to get to your destination.

We bought tour bus tickets (highly recommended by the concierge) that would deliver us to all the spots we wanted to visit. As we boarded the bus, the driver said "this bus will take you two hours to get there, you're better off to walk".

Walking in NYC is an adventure in and of itself. It took a few times, but I eventually got it, that you don't just dart out in the middle of the road to get to the other side. You need to wait until the pedestrian light flashes, lest you be run-down by a honking taxi or tour bus. And when that pedestrian sign flashes, you need to be prepared to move with the crowd, at a fast clip, or else you'll be trampled or bumped out of the way. I actually got quite good at knowing when the light was about to change, and by Saturday night, I was the first to step off the sidewalk and the tourists would follow my lead instead of the other way around.

I much prefer the city at night. The lights and sounds draw you in. You can catch live music on most every street corner. One spot we were treated to some excellent funk guitar and a break dance ensemble. The next block over, a percussion performance that utilized only pots and pans and plastic buckets.

MoMA was amazing. In a few hours, I was acquainted with master works that I have been looking at in books and teaching my students about for many years. We were fortunate to catch a special exhibition of Matisse, then strolled through gallery after gallery, in awe of magnificent works by Kandinsky, Monet, Kahlo, Rivera, Brancusi, Mondrian, Duchamp. The list goes on and on. Looking at Picasso’s lithograph’s made me crave printmaking. The design exhibit enticed a brief moment of plans to redecorate my home with contemporary furniture and fixtures. Bontecue sparked a few ideas. A quiet reverent moment overtook me when seeing Van Gogh’s Starry Night in-person. The museum offered major artistic eye candy around every corner. One day, for certain, is not enough time to take it all in. So much is already a blur.

The Saturday night plans were squashed when we learned that the Blue Note performance for that evening was already sold-out. Walking down the street, we passed a poster for the Broadway show “Million Dollar Quartet”. We called the box office at 6:00, and within an hour we were in a cab heading over to the Nederlander Theater. The show was about a chance meeting of four performers at Sun Studios in Nashville in 1957: Elvis Presley, Carl Perkins, Jerry Lee Lewis, and Johny Cash. The musical was out-of-your seat, toe-tapping energy. The actor who played Johny Cash was phenomenal, capturing the musician’s mannerisms perfectly, and matching his singing and talking voice equally as well. I was impressed that each of the actors not only acted the parts, but they played their own instruments and sang in their own voices. My mom was taken back to her early teen years, remembering when each of the songs was released, recollecting where she was with her friends at the time, and screaming with glee when hearing particular songs on the radio.

Sunday, the plan was to head to the Brooklyn Museum of Art. It took nearly two hours to get to Seaport by tour bus, drooling at the cultural delights as we drove through Soho, China Town, and Greenwich Village. Seaport was packed with people patronizing the fresh produce and souvenir vendors. From there we switched buses to head over the bridge into Brooklyn. We were let off at the public library and walked a short distance up the street to the museum, passing gorgeous botanical gardens.

Something was sparked in me. I felt an immediate connection to Brooklyn and if I am to return to New York, I think I would much prefer a stay in that area opposed to the more upscale area of 7th Avenue Manhattan. Brooklyn seemed to move at a slightly slower pace, the buildings were more “low-rise”, and the various ethnic shops and restaurants were less fettered by the glitz and glamour of the higher-scale more modern rents of NYC.

The Brooklyn Museum of Art was the “piece de resistance.” I had endured hours of uncomfortable bus seats, food on the run, humid anxiety-filled streets, long lines, cranky bus tour guides, and polluted city smells to get to this one particular spot.

We went straight to the fourth floor to the Elizabeth A. Sackler Center for Feminist Art. First stop: Kiki Smith Soujourns. Smith combined her sculpture with drawings on handmade Nepalese paper that illustrated a creation journey from spiritual conception to death. As an admirer of Smith’s work for many years, I was thrilled to finally see some of her work in-person.

I took my time with the Judy Chicago installation. I wanted to rush forward into the darkened room to see "The Dinner Party", but forced myself to begin at the entrance banners, reading each one, then detoured to a video viewing room to learn about the six year process of producing the artwork. I watched the video as long as I could before impatience set-in and led me into the exhibit. From first step taken into the cave-like darkened space, I felt an aura of reverence. It was quieter than a library as people filtered around the table, stopping at each place-setting as if it were an altar set in honor of a sacred holiday. I was overwhelmed with emotion that kept bubbling-up from deep within. I wasn’t prepared for the intense reaction that I had. It was a truly humbling experience.

After we left the museum, things went downhill a bit – though stories were created that in time will allow us to laugh more and more. For instance, we walked back to the tour bus pick-up site and waited over an hour, in rain, but the bus never showed up. Cell phone technology was much appreciated as it allowed us to call the tour bus company. After three employee conversations, and several minutes on hold, we were told that the tour bus was full so the driver decided to “skip” our pick-up spot. We were informed that it was the last bus of the day to drive through Brooklyn and ended up having to call a driving service to return us to the hotel. We saw plenty of yellow NYC cabs, but regulations prevent them from doing a pick-up in Brooklyn even though they are allowed to drop-off in Brooklyn. We were glad to get back to the hotel, albeit much later than anticipated, voiding our plan to spend the afternoon gallery hopping in Soho. We instead ended the evening at our hotel restaurant, then back to the room good season to pack for the next day’s travel back to Maine.

I like short trips, but two days just isn’t enough time in NYC to take-in the arts and cultures. But at the same time, it was more than enough - enough to make me appreciate the quiet of Lubec, the vast star-filled night sky, and the absence of zooming yellow cabs.

Sounds like a wonderful, inspirational trip (aside from the waiting). I've been to NYC many times, but have never ventured out to Brooklyn. I've put that on my to do list for a trip in the near future.

I wonder if the subway is a good method of getting there. I'm just starting to figure out the subway. When I get it right, its the best way to get around. When I get it wrong -- not so pleasant.

Shanna,
Sorry I missed you last week, but it looks like you had a blast. I love my tapestry!
-Amy

Kim -
I didn;t have time to play with subway - but hindsight, the subway just might have been a better choice!
Peace-
Shanna

Amy -
I was bummed to miss you! Thanks for stopping by when you were in Lubec. I peeked at your blog and it looks like Lubec is such a part of your soul. I'm glad the tapestry has found a good home.
Peace-
Sahanna

Ah!!! I had such a fantastic trip to NY last summer, and NINE days wasn't enough time either. I could live there, and I am your quintessential small town bush girl....but yes, I could live there. I too was overwhelmed by Van Gogh (even the mere scale) but was even more overwhelmed by Matisse and Klimt and the minute detail in the eyelashes of Frida Kahlo's portraits. We are so lucky to have assess to such beauty.

Rhonda- I missed Klimt! darn! I wouldn't mind visiting the city more often if it were closer...alas, everything is far away from Lubec.
peace-
shanna