New Beginnings in Teaching and Art 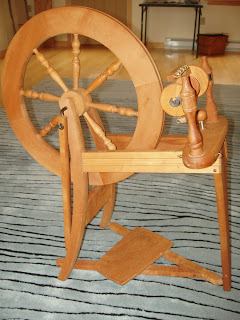 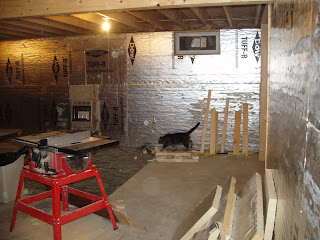 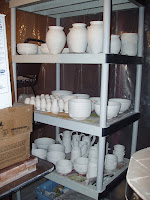 
I have been recuperating this past week from a minor procedure that left me with a big headache and a noggin full of stitches. In usual Shanna fashion, I assumed that that life would proceed as usual with a butt load of work lined-up to complete. I had marked-off one day in my daily planner as "recovery time" and was looking forward to a few days at home to spend in the studio. I learned a bit of a lesson in slowing-down, and though it was difficult to be so "still", I managed. Timing worked out well, actually, as I needed to write my proposals for the upcoming semester at Heartwood. I now had plenty of time to sit still and think!

Looking back over the past few days, even though I was "laying-low", I realize that a lot has occurred.

I had been talking about getting a spinning wheel since 2007, but time and resources haven't come together to make that happen. Recently I decided that I would like to incorporate spinning into my upcoming tapestry project. I mentioned this to our friends Nicky and Judy while visiting for dinner two weeks ago, and to my delight, Judy offered me her wheel! Wow! Talk about putting something out there to the universe. Within days, a wheel was sitting in my studio. Of course, I have no clue how to work a spinning wheel. Thankfully, the universe had that one figured out as well. Our friend Barbara, an accomplished artist/weaver, came right over and created a list of what parts I needed to to order. She also offered-up her talents to teach me what I need to know to get me started. I can't wait! Oh, incidentally, the fiber supplier I called in Wisconsin may be a distantly-related relative. I received some interesting information on my family's genealogy. (assuming we are the same line of Wheelock?). It's a hoot to call someone so many states away who I have never spoken with before - who just might be related to me.

This next part of the blog is for those of you not from Maine who think that Moose sightings are a myth to try to get tourists to visit us here. Yes, I swear to you, this huge creature really does exist.

About mid week, Chris packed-up his gear and headed off into the woods for an overnight camp. He does this occasionally and perhaps my sitting around whining about my pain and inability to get anything done prompted this bit of out-of-the-blue behavior on his part. I dropped him off at the trail head and off he walked into the woods with gear in tow. While he camped, I snagged the opportunity to pull-together his birthday surprise. Though I wasn't up for hours of pounding out clay, I managed to wrap gifts, create a treasure hunt, bake a cake, and prepare one of his favorite meals, malai kofta. I picked him up from the trail head about 24 hours later, excited to see his reaction at the surprise awaiting him at home.

I know that his little bit of the week had nothing at all to do with my path as an artist, but, it is too good to pass up. Apparently, while Chris was in the pitch black of night standing on a rock, watching the shooting stars, he heard this loud repeated snorting noise followed by several heavy stomps. After this happened a few times, the animal ran in what sounded like circles.

Hindsight, it appears as though Chris might have set-up his tent in the sleeping spot of a moose! My dad is a hunter safety instructor and thought that the "perfect tent spot" that Chris found was purposely packed-down field grass for moose-sleep-comfort, complete with scat markings that Chris considered a minor nuisance and had kicked "out-of-the-way" for tent placement.

The disgruntled moose seemed to want to challenge Chris, but thankfully it eventually backed down. Mind you, this was in the dark of night and Chris could not see what animal was making this noise. Upon his return home, we found the online sound byte of a moose. (click on #1 or or #12 to hear what he heard!) What a close call! I'm glad he's home safe.

Yesterday, myself and the kindergarten teacher from school attended a workshop at the Tides Institute and Museum of Art in Eastport. We are participating in a pilot program for something called "Visual Teaching Strategies." I'll be posting more about this as we move further into the process. It's an exciting way for students to develop critical thinking and language skills through the arts. The pilot program we are participating in is a partnership between the Tides Institute and The Isabella Stewart Gardner Museum in Boston. The presenter from Boston was phenomenal and I can't wait to get this project rolling in the classroom. Speaking of which, I can't believe that school begins in less than two weeks!

While I was in Eastport for training, my dad and his friend Gene visited from central Maine. Along with Chris, they insulated two walls of the basement, a.k.a. "The Pottery Cave". Last winter it was extremely cold down there, and even with two heating sources, it would take almost three hours to reach 60 degrees. Chris will soon begin insulating the ceiling. Working down there this winter will be much more tolerable and pleasant experience than last year. After blogging, I will head downstairs to finish the nailing and taping, then will clean-up the mess and get all equipment and furniture back into place.

I have missed working with the clay this past week. Why is it that when we are unable to be in the studio that we are also the most full of ideas?
Posted by SHANNA WHEELOCK at Sunday, August 15, 2010

Shanna, a special thanks for the link to moose calls.
Bonnie Beard