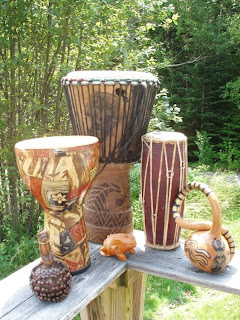 In a former life I must have been a musician. The passion that I feel for music is incredibly strong. But despite a brief stint at piano lessons in my early teens, in this lifetime, I never quite got my fingers to coordinate well enough to pull anything off more complex than Auld Lang Syne with one finger on the organ. I can't imagine trying to pick up a guitar and make sense of it, and my voice, well, sounds sweet enough....but I just can't hold a tune. Luckily, I have a good sense of rhythm and when I discovered drumming I discovered where I fit in musically.

My love of music comes from my mother. Since a young child, I was exposed to all the arts: visual, music, theatre, dance. I took ballet and jazz lessons as a young child. I saw plays at Lakewood, Maine State Music Theatre, University of Maine, Wang and off-broadway, and my mother's painting group would work outside at our house. Probably the greatest memory I have of my mother growing up was her love of music. She could pick up just about any instrument and play. She didn't read music, but could figure out most any tune if given time. She has come to collect quite a few instruments over the years: hammered dulcimer, fiddle, harmonica, piano, ukulele, guitar. The most interesting by far is the balalaika, a triangular-shaped three-stringed Russian instrument. When I was about ten years old, my mom played with the Berioska Balalaika Orchestra. I have memories of watching her concerts at different venues all decked out in her hand-sewn Russian folk costume.

My own love of music led me to attend more concerts than I can even count. I started out as what we would have called, back in the 80's, a metal-head. My first concert was Blue Oyster Cult when I was in the 7th grade. (Okay, you caught me....my first concert was actually Leif Garret a couple years previous...but shhhhh...don't tell anyone!). I then graduated to the likes of Black Sabbath, Aerosmith, The Cult, Twisted Sister, Ted Nugent, Ratt, Scorpions, Quiet Riot. You get the picture. In college, I was fortunate to snag a job in a music store and that led to backstage passes, free concert tickets, and in-store autograph sessions where I met (or at least stood in the same room with!) rockers such as Gene Simmons, Melissa Etheridge, Megadeth, Slaughter, and Jeffrey Gaines. I even met one of the New Kids on the Block. That would have been a highlight if I had actually been a fan like one of my friends who would scream and cry everytime she saw one of their videos.

My taste in music was broadened by working in the music store. How many twenty year olds do you know that would actually pay $70 for a 4-CD box set of Frank Sinatra music? Concert highlights went on to include Grateful Dead in Boston, Phish on a mountain in Vermont, The Newport Jazz Fest, and the New Orleans Jazz Fest. My favorite venues are small, like when my sis and I saw Irma Thomas at the Lion's Den, a real dive, in New Orleans (we were served Irma's homemade beans and rice while watching the show), or the Subdudes at a club in Portland. And just last summer, I saw one of my all-time favorite songwriters John Hiatt at the free outdoor LLBean concert series.

In Lubec one of the things I miss most about being part of "the rest of the world" is great radio stations. I especially miss WCLZ. Here, the options are limited to top 40 and country. Ick and double ick. I have listened mainly to NPR the past nine years, but even that station doesn't come in all the time. WERU doesn't have reception at our house either. But.....I have recently discovered Sirius radio! My family chipped-in for my birthday. I am once again musically-fed with great tunes! Out here in little ol' Lubec!

Praise the music Gods and Goddesses!
Posted by SHANNA WHEELOCK at Sunday, July 26, 2009

Have you ever made a ceramic drum? I've made one and want to make more, both with and without skins and am wondering about volume, etc. Any suggestions, comments would be appreciated.

Hi teresa - nope. have never made one! i imagine you can make them any size. the chalice shape would work. Someone gave me one once - the drum without the skin - and I never did get to finishing it. Let me know how it turns out for you!