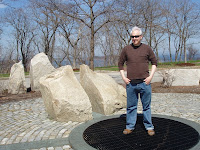 I woke this morning (after a beautiful restful eight entire hours of sleep!) to the sounds wind whipping the trees and rattling windows. The rain seems to have moved on, but the grey sky and breeze remain. It's one of those mornings where you just don't want to get out of bed. So, I didn't!

Well, I admit that I did go downstairs briefly to fix me up a cup of hot cocoa, but other than that, here I am, snug and warm, listening to the awesome sounds of nature. And Bello. That frisky cat is clawing at anything he can find, asking me to PLEASE let him out. But he will have to wait. For now, I am feeling in a...poetic mood. So, I thought that instead of my usual self-indulgent blog (okay, I admit, I did start out that way) I will share a few poems with you by my favorite writer, Chris Crittenden.

He has written, literally, thousands of poems since I have known him, and published hundreds. When we first met he was teaching ethics (feminist and environmental) and primarily writing articles for philosophical journals. That influence is evident in his poetry and novel writing. I will share three poems here, all of which are some of my all-time favorites. If you were to research his poetry, you would find that his work spans themes too many to mention. If I had to sum-up his work, though, I would see him as a writer of nature, politics, and the human condition. That covers a lot!

Chris can be reached at: ccritten@gwi.net

Exile of the Loons
night came
like a violin without a bow,
seeking my murmurs,
for silence had cursed its
ebony since the exile
of the loons. stars watched
with their trivial, infinite gaze
as my cheeks offered wet
glissandos, my lips wavered
between fever and howl, my
fingers scurried, plucking
strings of mist.

i waltzed with a willow
while moonbeams splashed her hair,
stomped silver trickles, accosted a
snoring crow, but still night
was not pleased

until i sobbed a strange rapture
over the lake where ghosts
once flew, skinny-dipped,
amphibious as a duck,
toward the liquid center.

there my throat learned
how to woo a marsh.
it memorized the vibration,
the heat, the solitude. finally
the night smiled, hearing
its cold stage haunted once again.

-from the chapbook Opals of the Opened Soul


The Gods Reflect on Creation
we gibbered and gabbled
in the null onyx,
afraid that heat might seethe.
one of us quacked too loud
and light erupted, birthing awe
alongside violence and waste.

after eons of reptiles
prayer wafted up. it was far better
than mindless solar pageantry.
our new toadies prattled
more efficiently than we,
collapsing truth
into a few apt equations.

soon they had a stash
of nuclear kicks,
enough to freckle plains
with poisonous craters.
it wasn’t enough for them
to gnaw the crust. life itself
made them salivate, the urge
to splice it into freaks,
to distill tints and recombine piths—

to be as great
as the thrill that started it all—
that seminal yoctosecond
among the timeless idiocy
of our babbling.

-from the chapbook Gordian Butterflies

Song for a Forest
no one can tell me
the forest has no flesh.
my feet have tasted its roots,
licked across arteries
even as their spirals split
again and again
below a simmer of fallen leaves—
pumpkin, pale, russet—
and a dark brewing depth
of drunken earth.

why are leaves drumming
and oak limbs swaying to a beat
as ripe as a lover’s heart?
why are raindrops sad or joyous
on the eyelashes of pines?
ants are red cells in a greater blood,
sparrows breaths in a windy lung.
owls are nothing but the pupils of elves
half torn from fetal sleep,
deer nothing but caresses
of brown fingertip.

i kiss streams with my eyes
and they kiss back with pouts of sparkles;
or whisper into my ear, soft as sensual lips.
i follow them where they feed cushions of moss,
toes of alders, visions of blue pools sky-entranced.
i hear messages in warbles and whirs
that come together like bits of a thought.
i watch sunlight splinter into bright lines,
the outer edges of a smile.

-from the chapbook Opals of the Opened Soul