A clay form inspired by "saffron". While studying the spice I discovered that it takes 150 crocus plants to get one ounce of dried saffron. Gathering of the saffron threads is a meticulous task. No wonder it is the world's most expensive spice!!!

Below is a photo shoot sequence of one of my stoneware sake sets. Bouli decided that this set, in the Northern Lights glaze motif, was her favorite.
(This set has already sold and shipped to the west coast, but if interested, I have at least one more set available in this glaze motif.) 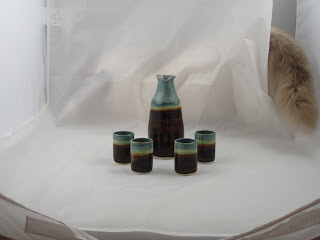 "I wonder what's behind this flap." 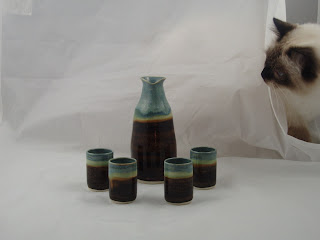 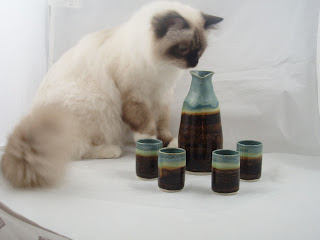 "Is that Sake? All I need now is a plate of sushi." 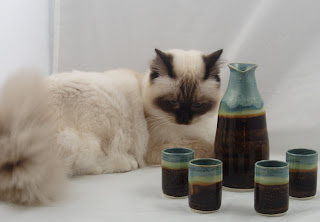 "Guess I'll take a load off while I wait for my server." 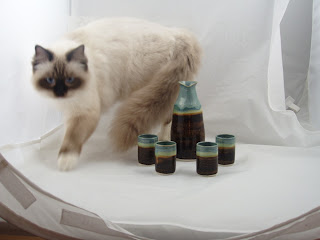 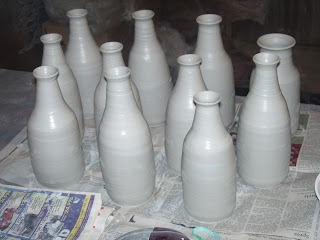 Below:
This is NOT what winter looks like this year. 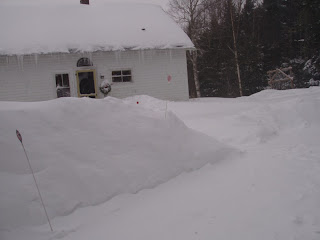 Last year at this time I was aching from all the shoveling, one storm bringing nearly two feet of snow in less than 24 hours time. I have to admit, while the lack of plowing has been light on the wallet, I am missing the while stuff. It is February 7th, and it looks and feels like spring is about to bust wide open.

It was a fairly uneventful week for me here in Lubec. A few days of bed rest last week while I recouped from what was, in my best estimation, a flu of some sort, set me a bit behind and left me feeling quite lethargic. My mind wanted to go about all the usual routines but my body denied any such occurrence. It's been quite a while since I have had anything flu-like and it took me off guard. I'm not used to sleeping thirteen hours in one stretch! I'm lucky, on a normal night, to eek out six or seven hours of shut-eye.

Needless to say, I was quite happy to have regained most of my energy by early weekend, just in time to drive nearly three hours to Bangor to pick Chris up from the airport. (Lubec doesn't have traffic lights or chain-stores, let alone an official airport.) Chris's flight had been delayed 24 hours due to "mechanical malfunction" (yikes!). That extra 24 hours was a blessing in disguise, for me anyway, giving me an extra day to recoup. For Chris, it was another story, perhaps. We were all happy by weekend's end though, having enjoyed a brief visit with my aunt and some very yummy sushi at Green Tea.

We are all settled-in back in Lubec. The cats are happy to have their play-buddy home and routines resumed. I am full steam ahead on studio and MFA work and Chris has his writing and teaching schedule rolling along. Mid week I pretty much devote my energy to teaching (this week I will spend extra hours working on next year's supply order) and of course, it is tax season. A lot of prep work has been done for our appointment later this week. It's always good to get that out of the way. Numbers. Too many numbers boggle the mind!

The pottery cave is starting to look like it was never cleaned at the turn of the year. I thought for sure that this time it would stay nice and neat. No such luck. Once projects take off, it's a whirlwind of (messy) activity. I've been playing around with some simple mold-making techniques and each time I turn around I see potential for another form. I should exercise some restraint so that I can begin work on an in-depth project that needs to be completed this spring for a show in Lubec. I'm incorporating local history and have been engrossed in vintage Lubec photos on the Maine Memory Network. It's an amazing site that has all sorts of history about Maine towns/cities.

The calendar has been filling steadily with business and pleasure appointments. Chris and I were reminiscing that when we first moved to Lubec in 2001, we had lots of time on our hands. Things sure have changed! Partly due to the town's revitalization and a myriad of cultural offerings - partly due to the fact that we know more people and are more involved with community. The expansion of my pottery business has demanded extra attention, too. Life in Lubec isn't dull, that's for sure!

I'm looking forward to the coming weekend in the studio and meetings with friends. For the time being, though, there is paperwork to be done.

I best sharpen my pencil and get to it.
Posted by SHANNA WHEELOCK at Tuesday, February 07, 2012