Full Swing in the Cave 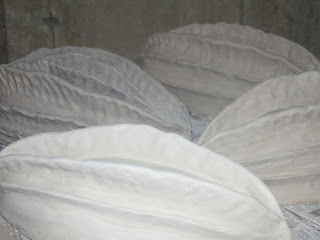 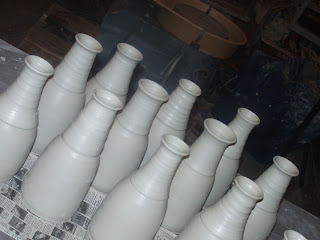 Production work has begun after a six week hiatus. 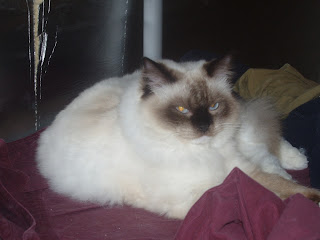 Bouli is my sidekick when I am working in the pottery cave. 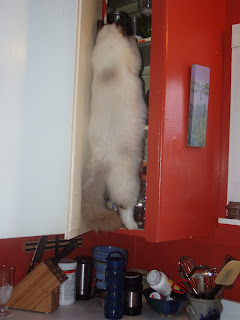 When not asleep in the pottery cave, Bouli is a handful on the main floor: climbing, jumping, exploring, and breaking things!!! This past week I had to tape all the kitchen cupboards shut.

Things are humming along here. It's a good thing, too. I might have gotten used to that leisurely pace of only teaching and MFA work to contend with. I went back into the "cave" for pottery production a couple days ago and am starting to ready for the season ahead. I have some fairly hefty goals and want to be prepared so that I don't feel the usual "running around like a chicken with my head cut off" for opening of the shop.

The house is kind of upside-down right now. There is a slew of paperwork strewn atop the tables as I analyze previous business decisions and set intentions for the next year or so. The "cave", which was cleaned better than it had been in two years, is now splattered with slip muck and tools while mounds of plaster-infused clay that had been used for mold-making covets nearly every inch of workspace. Greenware pots are lining the shelves and sculpture is scattered here or there drying and waiting for the next step.

The living room has been turned into weaving central with skeins of lushly-dyed yarn calling to the warp. A tapestry in the beginning stages is tempting me away from some of my other chores. I know that I should first take care of the most urgently deadlined work, but on a winter's day it is hard to say no to the warmth of a nearby stove and view of swirling snow outside the window.

January and February used to be my "down time". Living in Lubec in winter the first seven or eight years could been likened to hibernation of an entire town. Everything was shut-down by 6:00 and nary a soul was to be found on the streets. The town has been experiencing a renaissance the past couple years and now there is always something happening between music, theater, and the arts in general. The new restaurants have bravely kept their doors open for winter folk, and for that the town is appreciative. It astounds me that I now have to, here in little Lubec, Maine, set aside specific time (as I did last weekend) to cut myself off from the hubbub. I think most artists understand me when I say that time alone, with your own thoughts, is crucial to manifesting artistic ideas.

Winter, the kind with snow, finally began here on Friday. It was short-lived though. I shoveled steps, decks, ramps, and pathways blanketed by six inches of heavy white stuff until my arm muscles turned wobbly. My mittens were stuck frozen to the shovel, and despite the frigid temps, my head under hat was laden with sweat. I felt like I had just finished an exhaustive hour-long gym workout. But like I said, the gorgeous winter snow was short-lived. Rain soon swept in and reduced the mass to about an inch or so of undulating ice. I have yet to try the car on the long downhill rink we call the driveway. A walk to the mailbox yesterday revealed coyote tracks, emerging from the woods into our drive and across the road. Bello, my feline walking companion, curiously sniffed the tracks, looking about with caution. I suspect that the coyote had walked as we did only a short time previous.

I love Sundays. I love how the world slows down just a bit, for just a while. I am going to step away from the computer and the chores and head into the cave, which has become the warmest space in the house since the new insulation was installed. Bouli will no doubt rest nearby, my guardian cat. Bello will occasionally saunter in, mewing and asking to go outside, perhaps to explore, but most likely to take respite from Bouli, who can't seem to leave him be for long.