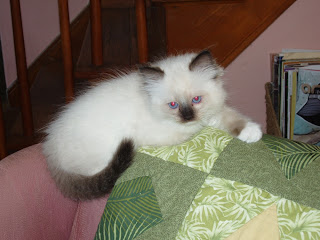 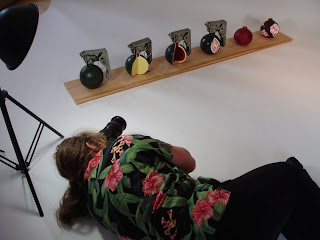 I have become a crazy cat momma: kitty pics and baby talk, squeaky toys, blanket covered basket, and incessant worrying about health. One week ago Chris and I adopted the cutest little kitten we call "Bouli". She is only 9 weeks old and doesn't weigh much more than a pound and a half, but she is one huge ball of feisty energy, and as her name "Tabouli" translates, she is "little spicy." She has turned the house upside down and usual routines are no longer routines. Almost everything revolves around ensuring her a healthy and safe start to life.

Our ten-year-old cat Bello is not as thrilled as Chris and me with Bouli's arrival. In fact, he is being a downright stinker about it all. A week has passed and the hissing and growling has not yet subsided. He has taken a couple swings at her and it is not becoming of him at all. Hopefully in time he will come around. He was fine when Barley was here, the elder siamese, but two years as the only feline on the premises has become quite comfortable for him.
All the while adjusting to this needy little beauty, there has been lots of other activity. Our school just finished a week of theater residency with "Children's Stage Adventures" out of New Hampshire. It was amazing! Rob and Lorrie Gray began last Monday with auditions for "The Fisherman and His Wife" and after only two hours, every student had been cast in a part of the production, except for the four who were recruited as directors' assistants. The entire week students studied lines, worked lights, practiced dance routines and songs. Students' nerves were at an all time high as they dressed in costume and make-up for the two Friday performances. The evening performance packed the house. I worked backstage corralling the "starfish", but from behind the curtain, I heard new-found confidence in our young actors, and the pleasure of the audience as they clapped, cheered and laughed. This was a top-notch residency with the Grays. Phenomenal! I look forward to the outfit's return next December as they work with students on "Midsummer Night's Dream."

This weekend was no respite. I woke Saturday morning to see that Bouli's eyes were red and closing-up. She had been battling the eye goop all week and repeated applications of tea seemed to help. But two days after stopping that regimen, the irritation returned, as well as sneezing and other unpleasant things. So it was off to the vets for eye ointment and meds. She is doing very well today and still seems to love me even after I force-feed her syringes of deworming meds and slather her little blue eyes in ointment. Somehow, I managed to work a few hours in the studio on a sculpture for the Skowhegan show later this month. Bouli rested on my foot while I applied encaustics to my Grenade Globe.

Last October, Canadian writer Janet Wallace visited my studio to gather information for an article about my work. In March, I learned that American Craft magazine picked it up, slated to be run in the August 2011 issue. (Someone should do an article on Janet! She's a talented artist and overall interesting person!) The magazine requested pics of my political work and transformation tapestries. I am by no means a skilled photographer and was directed toward the talents of photographer/painter Leslie Bowman. I was thrilled that Leslie agreed to do the shoot here in my own studio since traveling my work in quantity is not feasible.

Leslie returned today for an 8 hours session. Most people don't realize how much work goes into getting one good picture with proper lighting and composition. My sculptures come with a handful of complications that make it difficult to capture the full story without several points of view. The studio was a tangled mess of cords and lights as Leslie moved from tripod to floor to approach the works from new perspectives. Several hundred pictures were snapped in hopes of finding twenty or thirty solid pics that the magazine will choose to use. The next step is the editing which Leslie is no doubt doing now as I type. I can't wait to see the results. It was such a pleasure to work with her!

My eyelids are heavy so I best wind this down and get some shut eye. This is the last week of school and will be a hectic one, more so than usual. I am already thinking that it will be nice to try to catch up on sleep next weekend!
Posted by SHANNA WHEELOCK at Sunday, June 12, 2011

I feel sorry for Leslie, because the picture of her is next to the attention-drawing picture of Bouli. Bouli is stealing the stage!

However, congrats on the American Craft article, a great thing for you, Janet Wallace, and Leslie Bowman--who all get in the magazine!