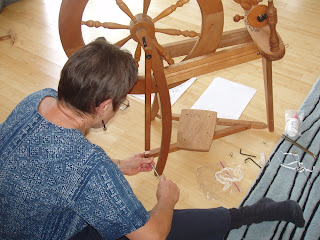 Friend Barbara Fox so kindly figured out those complex technical directions to get the spinning wheel up and running, and I received my first spinning lesson! 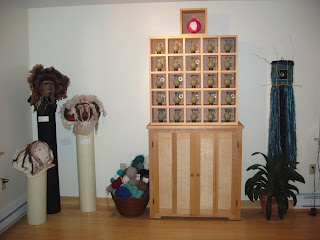 The tapestry on the right, "Jade Moon Night Swim", is now hanging in a fiber arts show at the Lubec Memorial Library. The show is up for two months. 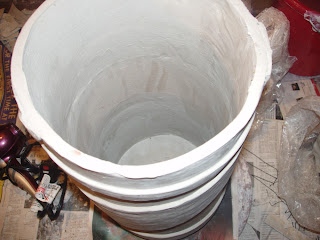 Interior view of current sculpture base, prior to adding supports. 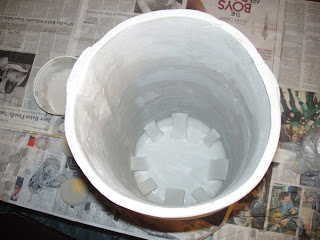 Supports have been added. 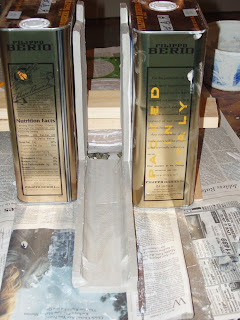 The top form for the sculpture in progress, supported by two gigantic cans of olive oil, which just happened to be on sale at the IGA this week for only $9.99 a can (phenomenal deal!) Limit two cans per customer, which is exactly what I needed to support the clay form! (Coincidence? Or divine intervention?) 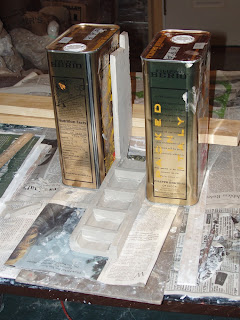 Adding interior supports for the form. 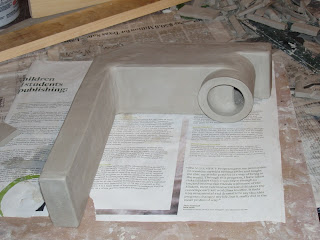 The top form shape is complete except for carving the final design. Its been a long but productive week between teaching days and managing classwork, the business, appointments, lessons and other artistic projects on nights and weekends. Monday and Tuesday evenings I divided my time between the pottery cave and the main studio futon. I spent a bulk of time trimming pots from the previous weekend, did a bit of time on a sculpture, and also reworked my short artist bio for a fiber arts show that just opened this weekend. It took me a while to decide which piece I was willing to let go of for two months, but finally the decision was made and Chris delivered the piece to the library on Wednesday.

Wednesday evening our friend Barbara came over to help get the spinning wheel in working condition. I looked at those technical directions, and well, it was all just a jumble of confusing pictures and words to me. She instantly knew what to do, which part went where, and just how much to tighten this or that. Soon I was sitting at the wheel making a mess of the wool fibers, but oh what a fun mess it was! It is going to take some time, lots of practice, to get anything decent spun. I imagine it is like when I began to throw on the wheel, or ride a bike for that matter. It's awkward at first, but once you feel the "rightness" you don't easily forget.

Thursday Chris went for an overnight hike and camp which left the house to myself. I had a meeting afterschool which took a bit longer than expected, and once that was done, I was back into the cave for more trimming and signing. I finally finished the pots on Friday night so that the weekend would be free and clear for new projects. I went to the wheel at 6:00 a.m. on Saturday expecting to throw for only a couple hours, but I got into a groove and kept it up until well after noon time. I eventually took a late shower and opened the shop, then switched gears into weaving. I have a new series that I am starting and have been anxious to begin.

Today was a real workout for the noggin. The current sculpture has structural complexities that are not at first evident to the viewer, or may never be evident for that matter. Even when not directly working on the piece, my mind has been thinking about the next step and how to create supports, or build a 3-D form from slabs with varied angles. Today, I was not only an artist, but a mathematician and an engineer.

The base shape was formed around builder's tubing. (I posted pics of that part of the process last week.) Clay shrinks as it dries, and as I suspected, the form became too tight around the tube for easy removal. Chris and I worked together trying to coax the tube out of the malleable clay shape. No luck. Plus, we looked pretty silly jumping up and down with a five foot high tube with a heavy chunk of clay attached at the bottom while the other person sat on the floor, arms wrapped around the earthy mud shape, pulling, grunting, and tugging. Then we grabbed a hand saw. No dice. Out came the Leatherman tool and its various contraptions that sawed and cut. Still no progress. We even tried tearing the tube inward at an angle. Finally, I gave-in and cut a deep, long vertical line down the outside edge of the sculpture, releasing it from the tube.

Today the base form seemed hardened enough to add the top slab. Again, it was a comedy routine as Chris and I together turned the heavy sculpture upside-down so that I could add interior supports to prevent collapse. That part was, though awkward, relatively easy in comparison to the next part. Creating the top form for the sculpture involved many angles and supports that will never be seen by the viewer, but that are crucial to the structure, providing strength and hopefully prevention of major warping. I expect some to occur, but hopefully I have done enough to end up with a decent piece that will endure the firing process.

The task of creating the top structure took nearly seven hours, leaving me quite exhausted, but feeling like I accomplished what needed to be done. As I worked through various solutions on the sculpture I thought of my students and how important the arts are to their education. One of the Maine State Learning Results' Guiding Principles is to be a "creative and practical problem solver". The arts are a perfect venue for building those skills, and those skills can be applied in all parts of life and work. In fact, I recently read that the number one characteristic that employers desire in an employee is the ability to think creatively.

Maybe next time someone suggests that the arts are not important in school, that just the basics such as reading, writing and math are necessary, I think I will refer them this blog entry.

Great point about the arts. Composing music too is almost entirely a creative problem-solving exercise.