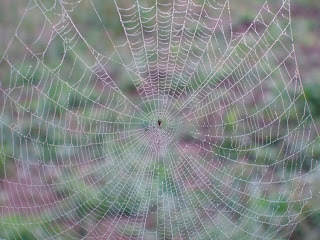 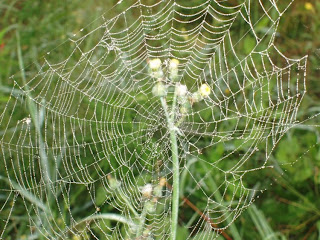 She must have been busy all night.... 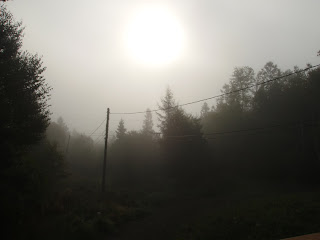 Foggy morning sunrise in Lubec
"The word Arachnida comes from the Greek for 'spider'. In legend, a girl called Arachne was turned into a spider by the goddess Athena. Arachne said she'd win a weaving contest against the goddess. Arachne won, but the Athena got mad and made her a spider, for challenging a goddess."
- Wikipedia (http://simple.wikipedia.org/wiki/Arachnid)

Have you ever noticed how nature can sometimes be the wisest guide of all?

Meteoroligists can tell by weather patterns if a storm or bright skies are heading our way, but on some subconscious level, I think that we all have our own "meterologists" built-in. If open and observant enough, we can decipher the clues around us without any fancy equipment.

For instance, without looking at a printed calendar, we know that Autumn is upon us. The birds are bit less quiet in the morning, apples have fallen into piles to the ground, leaves are changing color, and the air feels crisp. The mornings are dark a bit longer, and the sun sinks down behind the trees around supper time.

This morning, I woke feeling well-rested and like my "change-of-season cold" is working its way out of my system. As I laid in bed, I thought of all the possibilities for today. When the weekend arrives I gobble up as much creative time as possible in the studio, but I am participating in the open studio tour this weekend and yesterday I was busy nonstop with visitors from 10:15 a.m. up until closing at 5:00 p.m. I enjoyed my day immensely but missed my time in the studio. At the end of the day, I spent about an hour and half with a current sculpture project, and that seemed to feed my craving temporarily. Today is day two of the tour, which is typically more quiet than the first day. So, it had me thinking that perhaps (maybe???) I could squeeze-in some personal creative time.

So many possibilities....do I start the next phase of the ceramic sculpture, or throw at the potter's wheel? Sketch some ideas (which seem to be coming faster than the hours I am allotted to bring them into physical manifestation), begin the next sculpture, or...or...or...????

I hauled myself out of bed and walked down the old, creaky stairs, greeted by the semi-stillness of the near-autumn morning. I gazed out the window overlooking the field and noted the pea-soup thick fog encroaching as each minute passed, all the while a ball of bright white sun was ascending from the bay.

Closer to to the door, opening it, and stepping onto the deck, I was awe-struck by the handiwork of Arachne. She must have been up all night working on her tapestry. There were glistening webs woven in several locations on the deck, each connected by a few single strands to one another, leading down from the deck to the lawn area where more webs were formed. Diagonal lines like high-wire lines moved this way or that, and each time my eyes followed them, I saw another perfectly constructed and quite intricate web. Had this one spider spun all these beautiful mazes? Was she inspired to create, or just particularly hungry and waiting for some yummy late-season newly-hatched flies to succumb to her trickery?

Either way, I got my answer. Today I weave.
Posted by SHANNA WHEELOCK at Sunday, September 19, 2010

Lovely morning description Shanna. Your ears must have burned periodically as I pointed out your two monumental drawings in my Two Countries one bay tourgiving.

In Jamaica, the spider god Anansi is a joker,trickster. I once had lots of ladies crocheting lace, under the label Anansi's Dawtas, Hope you got a shot of the spider community in Lubec. Heidi

thanks heidi :) what a great tour - i really enjoyed it this year (well, i guess i do every year!)

and thanks for hosting the figure show!

I had to look twice! I have an almost identical photo. Phenomenal to see the beautiful droplets resting so delicately on the web. Nature is inspirational....always.