Submitting to "Calls for Art": Process and Rejection 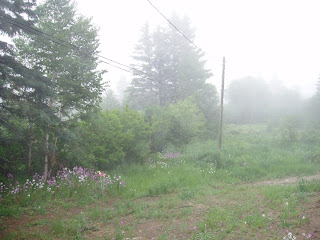 A misty veil of fog has settled over the field. Stepping out on to the deck this morning, it felt as though there was some ghostly presence shifting through the grey, eerie and magical at the same time. Birds were starting to chirp, signaling the waking of the diurnal creatures. The rains have brought all kinds of critters to this safe haven. Yesterday afternoon a small rabbit hopped through the rosy pink phlox and a fawn preened and snacked at the grassy edge of the drive.


The submission process sure has changed over the years. As usual, I find myself lacking some of the necessary skills to pull a packet together, nonetheless, the job is done. When I first entered the world of "calls for art" in the early 1990's, 35mm slides were the normal protocol. As a student, I didn't have the funds to hire a photographer who was adept at using filters, backdrops and professional lighting. My slides were a mess.

Now we live in an era where submissions are done primarily online with photos taken with digital cameras. Digital cameras are fantastic in that they almost guarantee a decent looking photo for even the most amateur photographer. Auto-focus and on-screen editing has eliminated the olden day waste when we would disappointingly thumb through an envelope of 36 shots (72 if you ordered double prints!) of blurry-faced friends with red-eye and sometimes a tip-of-the-finger shot that inadvertently snuck its way in to the front of the camera lens.

But even with a digital camera, photographing art can be tricky, especially when photographing sculpture. For a submission to a show, an artist wants their images crisp, true to color, and without disruptive shadows. Anyone who has tried to photograph their own art knows the frustration of trying to conquer all three of those requirements.

The past couple years, when submitting to a particularly important exhibit venue, I have solicited professionals to help me achieve those goals. For smaller sculptures I have had success with my own camera, an E-Z cube, and tungsten lighting. But for the larger sculptures which are not easily moved and mixed in with the usual studio mess, I rely on professionals who know the tricks of the trade.

A recent photo shoot went well. From approximately fifty shots I found two or three that I considered appropriate for the current submission. I let the photos sit in a folder on my computer for a couple weeks until ready to use, or rather until "down to the last-minute wire" of submission deadline. I had assumed it would all go swimmingly since I had the photos done, the most challenging part of the process.

Silly me. I opened the photos in preview mode only to find that the resolution was 72 dpi, a far cry from the 300 dpi that was required. Frantic, and highly frustrated, I tried setting up the lights and photographing my own series. The colors were nowhere near as warm as when the other photographer took the pictures, but I was desperate. Again, something happened in translation, and images were at too-low a resolution. I know my camera is over five years old, but at the time, consumer reports ranked it highly.

I began to frantically email people that I knew asking for a local photographer who could do the job ASAP and who also knew the tech end of things. Local is key. See, I have a sister-in-law who is an amazingly talented photographer, as well as a friend who is a photojournalist, but they both live over four hours away. That just isn't feasible. A return email came with an offer to look at my file. So I emailed the file to Jude and soon after received a reply that turned my whole day around. It turns out, it was just my own ignorance with the photo program. I didn't realize that I could actually play around with the resolution and image size. So simple.

Once that little golden nugget of information became available (thanks, Jude!) I was able to proceed with the online submission.

The next phase entailed updating my artist resume. I removed some of the older shows from more than ten years ago and added a few new accomplishments. Artist statement was the final component. I asked my husband to give it a read, he did, despite his own super hectic schedule which right now involves his own writing and submitting, teaching an online ethics class, giving a poetry reading in pacific palisades, and preparing to facilitate an online poetry workshop for Rooster Moans. So bless his heart, he gave it a read and came back with some edits stating "the first four paragraphs are dry."

I was surprisingly pleased with his comment, since he tends to sometimes be far too gentle, but this time, he laid it on the line and offered a few suggestions. I mixed things up a bit incorporating some of his suggestions while still preserving the parts that I felt were necessary to my own voice and style.

The actual online submission, which included uploading photos and typing basic information, was a snap. Now the waiting begins. I go into the process with hopes of being accepted, but also know the reality of the competition, the thousands who enter, and that it also comes down to which pieces will complement each other in a particular show or also what personally appeals to each juror.

Albeit, there is still a glimmer of hope in me that hell will indeed freeze over and that pigs will someday fly.
Posted by SHANNA WHEELOCK at Sunday, June 06, 2010

Shanna, I hope your submission is chosen. I know how frustrating waiting can be. *Note to self---next year tech training--work with Shanna on Photoshop Elements :)

angel, i need all the help i can get!

thanks for the well wishes :)

Best of luck to you on being accepted. Hope the wait isn't too long.

I often look to the skies hoping to find flying pigs.

sometimes, kim, those pigs do fly...it is rare, but i've seen a few with wings.