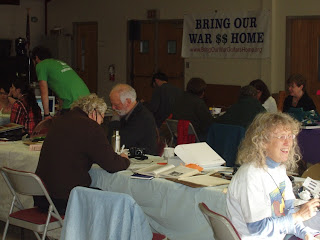 Artists at the Maine Draw-A-Thon in Bath, February 13, 2010. Robert Shetterly (center of photo) was one of the organizers of the event. 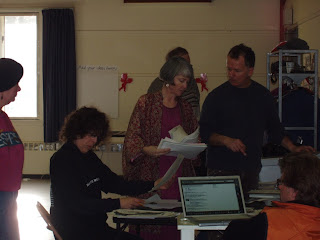 Organizers of the event work to document the drawings for a "zine" that will be handed out to legislators at the State House on Thursday. Left to right: Natasha Mayers, Lisa Savage of Code Pink, and Kenny Cole. 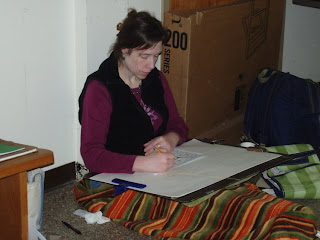 Here I am, tucked away in a corner, working on a drawing. 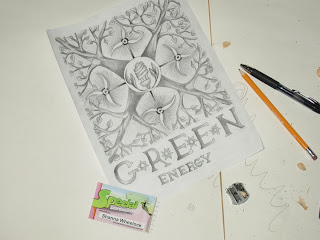 One of the drawings that I completed during the Draw-A-Thon.

This will be a memorable Valentine’s Weekend for sure. Not only did my husband take me out for a romantic brunch at my favorite Hallowell restaurant, Slates, but we also spent yesterday with kindred spirits united in effort to work toward a better world. We couldn’t feel more loved than we did around hordes of peace-loving activists whose depths of care for humanity are boundless.

The first ever “Maine Draw-A-Thon” kicked off at 9:30 a.m. at the United Church of Christ in Bath, Maine. Organized by artists Natasha Mayers, Kenny Cole, Robert Shetterly, and Lisa Savage of Code Pink, this event was community action art at its finest.

With the idea to “Bring our War $$ Home”, the 90-day campaign began with artists brainstorming ways that they felt would be humane and practical uses of our tax monies. Since 2001, Maine taxpayers have spent an estimated 2.5 billion dollars on the wars in Iraq and Afghanistan. Yesterday’s gathering of artists, musicians, and Poets rallied their imaginations to put down on paper, sing out in song, and recite in prose their visions for our state.

While artists drew, painted, and collaged, artwork was posted to the walls around us. Artists captured on paper the essence of a Maine with equality for all, healthcare reform, a clean environment, bio-fuels, affordable housing, childcare, and better educational opportunities.

Late in the afternoon, as artists packed up their supplies, a second round of community members began to congregate, carrying armfuls of delicious potluck foods. All settled in to a warm dinner followed by music and poetry. It was a powerful opening to the evening when performer Hannah Maris, accompanied by her son on djembe, walked around the tables chanting for peace. Natasha, Kenny, Robert, and Lisa all gave moving speeches about how the event came about and why it is so important that our voices be heard now.

Intermingled throughout the speeches, accomplished Maine poets, including Maine’s poet laureate Betsy Scholl, Henry Braun, and Jim Mello, read their works. Perhaps the most moving part of the evening for myself was the reading of a poem by an Iraq war veteran. She was introduced as having been deployed in 2003 at the beginning of the war, during the “shock and awe” phase, on a military ship made right there at Bath Iron Works. So young even now, she must have been in her early 20’s at most when deployed. Hands shaking, voice trembling, she read from a handwritten sheet of paper the words she had formed only earlier that day on a walk with her dog, in a moment of peace. She then said that those moments of walking with her dog are the only moments of peace that she feels, ever.

It was impossible to not sense her deep pain and fear as she recited the word darkness over and over in her poem about being on a ship, in the middle of the ocean, in the darkness, seeing a flash of light, hearing loud explosions, and “knowing what is out there”, but being in the darkness, and, not knowing.

The evening came to a close with my favorite North American poet, Chris Crittenden, reading two poems. Before his reading, he spoke about choices, in a very simple way. He said that he would read two poems, one being about something simple, beautiful, life affirming, and the other poem about something destructive, sad, horrific. He said that we have a choice, and we can choose to live in beauty, or we can choose the other. The two poems, “Apple” and “Monk with Gasoline” juxtaposed against each other made strongly his point.

Last night’s event continues on Thursday, February 18th, at the State House in Augusta at the “Draw-In” where Natasha, Kenny, Rob, Lisa, and Bruce Gagnon of will speak for a press conference. Artwork that was created at the “Draw-A-Thon” will be made into a booklet and handed out that day to legislators. Poets will again perform, musicians will sing.

The energy is infectious. I urge you to join in and let your voice be heard!