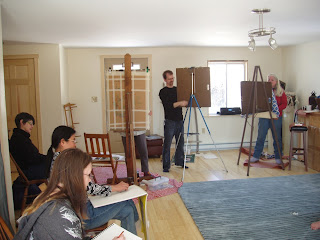 Artists were intensely focused while drawing from the live model 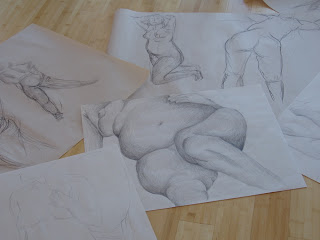 A medley of my drawings from the two-hour session 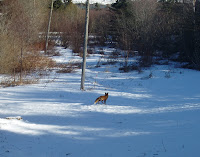 The paloelithic era brought us voluptuous figurines such as Goddess of Willendorf. The Greeks offered up their version of the "ideal" body through exquisitely sculpted statues, and Botticelli painted us a modest, long-haired beauty in The Birth of Venus. Matisse collaged paper for Blue Nude, and where would the Sistine Chapel be without the genius figure renderings by Michaelangelo? Andrew Wyeth had his Helga, and Rubens had his Three Graces.

My students, when flipping through the pages of art history books, often ask me "why would an artist paint a naked person?" It's hard for their young minds, who only know the body as something that is required to be clothed in public, to understand why rendering the nude figure is considered an art. Their only knowing of a naked body is that it belongs in adult magazines or in R-Rated movies.

I try to explain that it requires great skill to be able to draw the figure, and that it has been drawn, painted, and sculpted for hundreds, even thousands, of years by many of the great master artists. I go on to say that for these artists, the body is seen as something beautiful, but also a challenge. Furthermore, it is required in art school that students draw from a live model, and that they learn how the body form connects, moves, and works as a whole. How would a fashion designer draw clothing if they didn't have a thorough understanding of proportion? And where would the medical field be without artists who illustrated the figure, inside and out, for textbooks.

I remember my first drawing class at USM with Professor David Schneider. At eighteen years old, I was not yet an art student, and had no inclination to be one at the time. I was merely required to take an arts-related course to fulfill the core requirement. I liked drawing well enough: still-lifes, landscapes, cute little cartoons. It never even crossed my mind, not once, that I would have to stare at a naked person for the duration of a three-hour class and attempt to render the structure of a human figure.

To my surprise, after the initial embarrassment wore off, I fell in love with the process. My drawings became more free, lines expressive. It wasn't about seeing an arm or a breast. It was about sensing hills, valleys, curves, and shadows. In much of my artwork I am calculating, methodical, careful. When drawing the figure, my arm comes to life and the lines emerge quickly, without thought.

That first college drawing course, where we drew and clay-sculpted the live model, set a foundation that still, twenty-two years later, impacts my work as an artist.

Yesterday I played hostess for a live model session. Eight artists from Lubec and Eastport areas gathered to draw and paint. After the initial frenzy of trying to find enough chairs and supply stands, folks settled-in. The focus was so intent that the only sound heard was the scratching of art materials against paper.

The model was fantastic, leading us through a series of two to twenty-minute poses. What was most impressive was that, with her beautifully-rounded seven-month pregnant belly, she was still able to contort into challenging positions that accentuated graceful lines and muscle tone. The drawing session cumulated into a one-hour pose that was reminiscent of Delacroix' Odalisque Reclining on Divan.

I felt a bit rusty at figure drawing since it had been perhaps three years since I last worked with a model. I made a mental note to self that I need to put-in some time with hands and feet. I patted myself on the back for doing an adequate job with the foreshortening, which I admit, I often avoided in the past. The hub bub of the day's activity began to subside as artists packed-up their easels and drove away. I finished returning the chairs and stands to their appropriate spots in the house and went back into the studio to photograph my sketches.

Out of the corner of my eye, I caught a glimpse of movement. Camera still in hand, I lifted it up in time to snap a shot, though blurry and unfocused, of a fox in the front field. Moments later, a second fox emerged and the two playfully chased each other through the snow before winding off into the tree line.

What a gift that was, after an artistically fulfilling morning, to witness such playfulness and beauty in nature, even on a bitterly cold winter day.
Posted by SHANNA WHEELOCK at Sunday, January 31, 2010

What a beautiful reflection of your history in figure drawing!!! I too had a really lovely time yesterday, as did the whole crew from Eastport. It also felt so nice to merge 2 communities who often live such different lives though we share 1 bay. I look forward to the next session in your beautiful studio... Ted Andrews says that the fox is about the "feminine magic of camouflage, shapeshifting and invisibility." Pretty neat, huh?

Thanks Anne! I went right to my Animal Speak book by Ted Andrews. Every sentence resonated with me and current happenings. The entry focused on creativity as well, and related nicely, I thought, to marking the first group art session here. Thanks so much for being a part of that!

I agree with Anne, this is a "beautiful reflection." I think captivating writing can be added to your list of many wonderful skills. All around you benefit, and you deserve to go far.

Your space looks wonderful and looks to be the perfect place for an art gathering. I loved seeing evidence of the visit from Mr. Fox too. That indeed makes it extra special. -Lili

I have never had the opportunity to draw a naked figure. I did take a class where we had a spur-of-the-moment chance to do a clothed figure. I turned a pleasant-looking young man into Herman Munster. It sounds like you all had a wonderful day.

Looks like a beautiful space to be working in, Shanna! If you host a figure studio this summer, please let me know, as I'd like to join everyone if I have time.

Michael - I'll let you know when/if there is a drawing group here in the summer. We're working with the model again in a couple weeks - but I think the drive might be a bit too far for you!!!