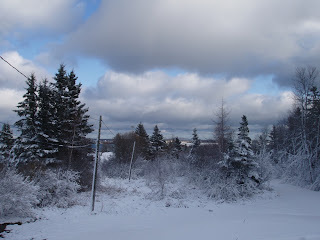 our yard, first snow of the season: a magical fieldscape 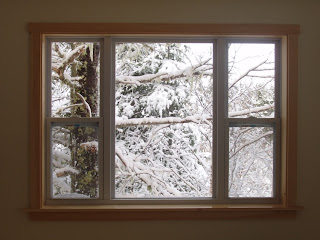 I had been been waiting with great anticipation the first snow of the season. Sometimes I see it in October, though it doesn't stick around long, usually just a dusting to incite all the excitement that goes along with thoughts of a snow day from school, holidays, and cozy creative hibernation. This season however, Mother Nature made me wait extra long. We are one week into December, admittedly still autumn according to calendar, but it seems kinda late. I must say, though, that I am not at all disappointed with the result. The storm was forecasted "a mini nor'easter", and yahoo weather flashed a bright red "WINTER STORM WARNING" that just made the excitement of first snow all the more thrilling.

It's not like I am an avid outdoor winter sports enthusiast. I did cross country ski when younger, and have thought of picking it up once again, but I am one who complains about shoveling, and no matter how many layers of wool I am buried 'neath, there is always some part of me that seems to be cold. Still, winter is a magical time and a season that I look forward to.

I like the darkness. Others complain when the clocks are turned back and suddenly it is pitch black at 4:30 p.m. Not me. I welcome it. And I love the mornings as well. There is no stillness as deep as the early morning dark hours of winter, when the moonlight is cast over a freshly blanketed field, shadows of animal tracks visible, and the heat of a lit fire feels so comforting knowing it is well below freezing on the other side of that pane of glass.

We were all a scurry Saturday in prep for the big storm. The barn needed to be cleared enough for the car to park under cover, and deck furniture needed to be sheltered or tipped on its side. The wreaths were finally hung then Yule tree bought, delivered, and decorated. While Chris and I went about completing these tasks, my father from central Maine was hammering away in the new studio space, trimming out windows.

The only thing that would have made the first storm more perfect would be if I was in the new studio working away on my art. Winter time is the best time for creative reflection. I have an idea, though, that I will have plenty of opportunity for that in the coming months.

Afterall, the weatherman already said that it looks like snow again on Wednesday.... "a real coastal hugger."

Forget the sugar plums....I have visions of a snow day dancing in my head!