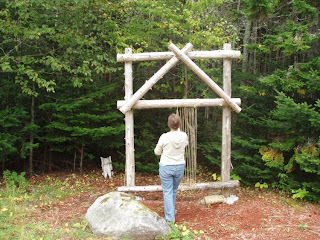 Shanna warping the Earth Loom in saturday's gusty downeast wind, preparing to weave in honor of Mabon with plants harvested from our land.
Last night I dreamt of a white horse running through a field. Every once in a while I would catch a glimpse of it's mane which looked like a Pegasus wing. The horse eventually came to me and I was able to pat it.

When I dream of animals, I refer to the book "Animal Speak" by Ted Andrews, to gain some insight into the dream's meaning. The horse represents freedom and journey, and judging by how fast this horse was running, I sense that some parts of my life might be moving very fast for me, faster than I might normally expect.

It is an odd juxtaposition, to on one level sense this speed, but on another level there are moments that feel so still and slow.

This past summer had me busy between building the new studio and organizing for Lubec Arts Alive. From these projects (which are both still in progress though transitioning toward an "end") I went back to my teaching job at school. At the same time, I have new projects forming in my mind and ideas about moving the arts forward for both our community and in my own personal studio and work as an artist. My mind never seems to rest.

Yet, in this one time-warp type moment yesterday, all things slowed to a perfect moment of stillness.

I had hustled around the house all morning in preparation for the Two Countries One Bay Artist Studio Tour. The final preparation was to warp the Earth Loom so that visitors could join me in weaving. At first, I was a bit discouraged. The air felt bitterly cold, and the wind was whipping wild. My hands were approaching numb and I still had many strings to measure, cut, and tie.

In this moment, listening to the rustle of tree limbs sway, leaves twirling and falling to the ground, I was in a meditative space with the rhythm of repetitive cutting and tying. I looked out over the field and toward the water, then the sky, watching the trees sway and grey clouds move quickly by with peeks of blue coming through. Instead of being the one always moving fast, I felt still and centered while nature moved fiercely around me.

Then, like a slow-motion movie scene, an osprey flew toward me, swooping down to perhaps only thirty feet from ground, then back up and over the barn, between an opening of trees, and off over the field.

It was a magical moment.

A freelance writer from a Canadian arts magazine interviewed me on Friday (I was one of many artists interviewed) and she asked a question about how the land inspires my work. Words can't fully express an entire philosophy and reverence for nature that I feel. But if I could have relayed to her that moment with the osprey, if she could have stepped inside my soul and felt that perfectly still yet whirling moment, I think she would have understood.
Posted by SHANNA WHEELOCK at Sunday, September 20, 2009