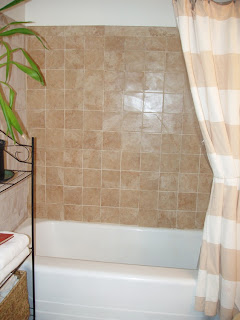 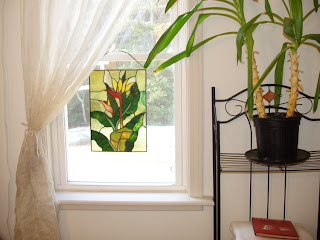 It was a wild week - between a school field trip, submitting student artwork to a competition, and remodeling the bathroom. My head is still spinning, by body a bit sore from the odd contortions needed for painting tight nooks and crannies, and I feel like I could use about a week's worth of sleep to recover. Nice start to April vacation!

Kudos to UMM for putting on another great "Thou Art Fair" for Washington County high school art students. Our music teacher and I took about 20 students to the fair on Thursday. Each student displayed a piece of their artwork, and the high school band performed Pearl Jam and Kenny Wayne Shephard songs. So much talent in these kids! The day was spent painting, making t-shirts, playing games and various instruments, sculpting, collaging and watching belly dance and live musical performances.

About seven students' work was selected to be on display this week at Machias Savings Bank for the annual Women's Club Art Competition. The work looked good - I am crossing my fingers that at least one of my students places in top three. There is always some tough competition!

Remodeling Mayhem. Yes indeed. The bathroom was in dire need of a makeover. So enters "Extreme Home Makover Lubec". It all began last summer when I had a plumber in to fix some leaky pipes and install a couple new faucets. Talks began about a new tub area. The plumber neglected to return most calls, or lost dimensions, colors, various specs each time. I am amazed at how irresponsible some tradesfolk are here, not returning calls or showing up when promised. I wouldn't think I would have to practically beg someone to take my money, but that seems to be how it is here!

We have a builder now who seems to be more consistent. We began talks last November about tiling the tub area. I wasn't able to select tiles until January, but by that time he was off to Florida for winter retreat. In March, I got a call as soon as he returned. Wow! Someone called me back!

Excitement, knowing that after two days work I would have a new shower - complete with the gorgeous new faucet and shower head and new window trim. I could survive two days without a shower. It was for a greater outcome.

I am now on day #4 no hot shower. And....It looks like I will be waiting until Wednesday! The shower head was defective, causing extra (costly) hours of work, and a BIG nasty leak. We only endured one night with no water in house, but the stress of not knowing when we would have water again was a bit unsettling. The new shower head is on order and should arrive on Tuesday, and the builder says he will return then to install it. Yey! Let's hope it goes as planned.

For now, I am happy with the tile. It looks great. The new window trim is sweet, and I did a marathon painting session to brighten up the bathroom. Hopefully we will get a new toilet and floor this summer coming.

I am about to head out to the studio to throw. I am wondering how well I will be able to clean my clay-covered body without a shower. Hmmmm.... always an adventure.
Posted by SHANNA WHEELOCK at Sunday, April 19, 2009

You were up very early today. The bathroom is a gem. I think that workmen seem to be as you described in many rural areas especially if there are diversions like hunting and fishing that pop up.

Well, they seem to be coming through in the end - which is the most important thing. Our whole house needs a makeover...just picking away at it as we can. I'm envious of people who have building, plumbing, and electrical skills!