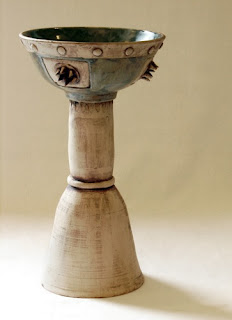 I began this series of work about four summers ago. At first, I just referred to these pieces as "spike pots". They were not typical of my usual work. They were spikey, menacing, ugly, and painful to pick up (mind you, some of these pots have literally hundreds of little prickly spikes).

I work intuitively. When I go into the studio, I often don't have a plan or sketch. It sometimes takes me a while to figure out the meaning (if any) to a particular work. I knew that these pieces were full of pain, far from the joyful and spirited works that I am accustomed to creating. It took me a while, but I finally found the connection. In my studio - I listen to either music cd's or NPR. At this point in time, I spent many hours listening to reports of war in the Middle East. While working, I would become emotional, and not able to comprehend how people could think that killing would be the answer to any problem. I thought about the children and innocents that are killed, or the young soldiers who have been told what to do, or what is right, before they are even old enough to form their own beliefs and values.

So evolved this series which I call "The Machine."

When folks see these pieces for the first time, there is no middle ground. They either love the pieces or hate them. I am not offended at all when someone doesn't like these sculptures. Even I can admit to their ugliness. They serve no function, won't look pretty in the den on a shelf, and aren't exactly the kind of gift you would send grandma at Christmas. After all, they do represent war. And what can be more ugly than that?

(Pictured above: "The General")
Posted by SHANNA WHEELOCK at Saturday, December 06, 2008

I've known your work for so many years and was excited to see this new series last summer. I think it's good for you as an artist to push the limits for yourself and be challenged. No only are these pieces excellently crafted, but they are thought provoking and uncomfortable, much like your headless goddess forms of years ago. Perhaps with these pieces and your woven masks, you are progressing to the next stage of the goddess. Empowerment? Frustration? Anger? Whatever it is, I'm proud of you!!!!!